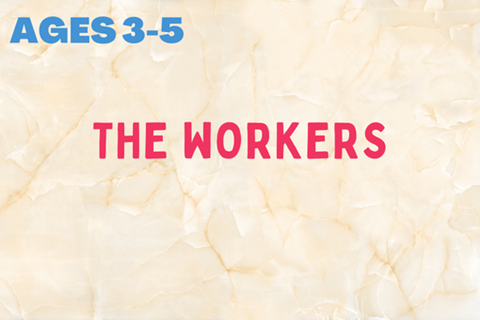 Background: Children have an innate sense of fairness,so the man’s actions in the story mightseem strange. Use this strangeness tohelp them explore the idea that what wereceive from God is amazing and worthevery penny (like the pearl from Session1). It doesn’t matter when we becomefriends with Jesus, the reward is thesame: the best we could ever receive!

Welcome each child by name, and invite them to join your circle and share in the snacks you have brought. Chat together about what has happened since you last met. Ask the children if anyone has done anything surprising or special for them. Perhaps they had a treat or went to a birthday party. If possible, share an appropriate example from your own life.

You will need: chairs; music and the means to play it

Play a game of musical chairs, but declare the child who is out first the winner. Give the children a chance to tell you that isn’t how you play the game. Ask them why not. Don’t they think it’s a fair way to play the game? If the children would like to, play a few more rounds.

Gather the children together and say: Jesus was telling his friends about the kingdom of heaven. As he was doing so, he told a story that at first didn’t seem very fair. Listen, then tell me what you think.

Once there was a man who owned a vineyard. That’s a sort of farm where you grow grapes. It was harvest time, so he needed some workers to come and help him pick the grapes. Early in the morning he went to the marketplace and chose some people to help. Choose some children to be the morning workers.

He promised to pay them a silver coin for a day’s work, so they went to the vineyard and started to pick the grapes. Show the morning workers how to mime reaching up to pick grapes. Ask them to carry on doing this throughout the story.

But the man still needed more help. At lunchtime the man went back to the marketplace and chose more workers. Choose more children to join the morning workers. Encourage them to do the same actions.

In the middle of the afternoon the man went to the market again and asked even more workers to join in. Choose more children to join the other workers. Encourage them to do the same actions.

Near the end of the day the man went to the marketplace one last time and took all the people who were left to his vineyard to work. Invite the remaining children to join the other workers and mime picking grapes.

But soon it was time to stop work. Ask the morning workers how they feel. Are they tired from all that picking? What about the lunchtime workers? And the afternoon workers? What about the ones who have only just joined in?

The morning workers were cross: “We worked much longer than the others. Why did they get the same pay as us?”

The man replied: “Why are you cross? I paid you the money I promised you. It’s up to me how much I pay everyone else. Do not be jealous just because I’m generous!”

Jesus was showing the people that in the kingdom of heaven the last will be first and the first will be last. The people who become friends with Jesus last are just as important as the people who believed from the start, and they will get the same reward: to live in heaven with him. God’s kingdom isn’t about the winners or who has worked hardest. It might not seem fair at first, but God will never run out of love and we will all get what he has promised us.

Let the children explore the story with the dough. They could model making grapes. They could share their dough out fairly or unfairly. They could press the plastic coins into the dough to make imprints. Give your group time and space to ask questions, act out parts of the story and deepen their personal understanding of a tricky concept.

You will need: purple playdough

Ask each child to make a ball of playdough and place it on the table with all the others in the shape of a bunch of grapes. Pray together: “Thank you, God, that you are generous and loving, and that we can all share in your kingdom: the first, the last and everyone in between. Amen.”