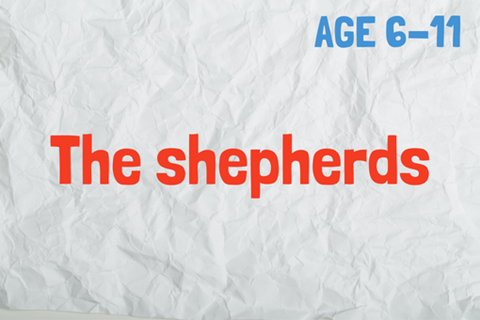 Background: Jesus has been born in Bethlehem. Now God wants to announce his arrival, starting with the most unexpected of

people. Sometimes we think that faith and revelation are only for the people at the front, the most important people. Shepherds were low down on the social scale. The fact that God chose them to reveal the news of the Saviour’s birth says much to us about the inclusivity and radical nature of God’s saving plan. Children often feel as though they are at the bottom of the pecking order. Help them explore the idea that Jesus came for them as well as for the people leading the church!

As you begin the session, invite the children to sit together in a circle and pass round a simple object. When a child has the object they can share their response to the question. Sometimes it’s helpful to have a sand timer so you have time for each person to share if they want to. If a child doesn’t want to say anything they can just pass on the object. Ask the children to talk about who they want to share important news with.

Chat about the differences between the two lists. Is it possible for people to move from one side of the paper to the other: to become important, or to go the other way and become insignificant? Are there times when members of the group feel insignificant?

Ask who can recap the story so far. Who knows what happens next?

Say that everything about Jesus’ story is slightly upside down. Jesus is born to be the king of the universe and put things right for ever between God and his people, he’s born to pretty ordinary people in pretty basic circumstances. Not only that, but when he’s born, the first people God wants to tell are really poor, ordinary people with no influence or power at all. That really sets the stage for Jesus’ whole life. It’s the poor and the powerless – the people no one else wanted – that he went to spend time with.

In today’s story, God gives a big announcement to some shepherds. They visit Jesus and then go off to tell as many people as they can. Read the story from the Bible (Luke 2:8-20). The International Children’s Bible is great if you have a copy.

Ask the group to divide into groups of five or six and prepare a quick drama sketch of the story. Once everyone has finished, allow some time for groups to perform the drama to the rest of the children. They don’t need to if they don’t want to – they could just enjoy the process! Get some initial feedback on how the shepherds might have felt, and on what might have made them rush off to tell the rest of Bethlehem.

You will need: small boxes and flat stones from ‘Session 2’; permanent markers; hay

Continue to make your stone nativity scene. Put a little hay into the box, then as you decorate the stones you can place them inside. In this session, use the permanent markers to decorate some stones to look like shepherds and angels, with the odd sheep if you like. As you work, chat together about the story and what the children think God is saying to them. If you didn’t do ‘Session 2’, you’ll need to create stones for Mary, Joseph and Jesus to add to your nativity scene.

If you can’t get stones, you could form some flat pebbles out of air-drying clay a few weeks in advance so they are dry enough to be drawn on. Or you could make salt dough pebbles and bake them in the oven ahead of time.

Ask the children to find a quiet space and think about what it must have been like to be a shepherd hearing the news from the angels. Let them write a prayer as if they are shepherds, thanking God for the story they have been part of. Give help to any reluctant writers, helping them to articulate and record what they want to say.

If the children would like to read out their prayers allow them time to do so now. If they don’t want to, have a time of quiet as the children reflect on the prayers they have written and talk to God about what they have discovered through this story.