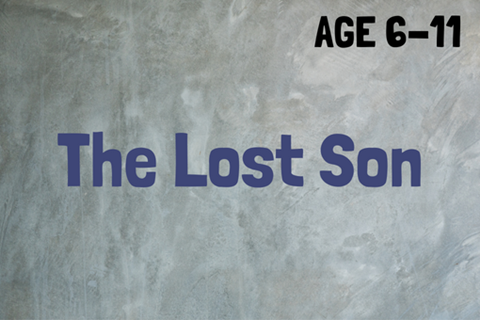 BACKGROUND: As this is a very well-known story we can easily dismiss it. However, use this session to dig deeper into the issue of identity.

While we were still a long way off, our Father ran to us, threw his arms around us and welcomed us. Allow this truth to be revealed in your heart again as you prepare for the session.

Welcome the children by name and share out any refreshments you have brought. Ask the children about their week, then go on to describe the best party you’ve ever been to. Whose party was it? Why was it so good?

You will need: ten sweets or small pieces of fruit (such as grape halves) per child Make statements, such as “Never have I ever been in a police car.” If this statement is true for the children they should eat a sweet / piece of fruit. The first person to eat everything is the winner.

You will need: dice (one per team); ingredi- ents for ‘pigswill’ (same amount per team); bowls; wooden spoons; sections of the story as below (adapted from the International Children’s Bible), printed and numbered; cover-up and clean-up equipment

Before the session, gather together the ingredients for pigswill. Each team  will need: one tin of baked beans, a jug of water and a vegetable stock cube, carrot peelings, potato peelings, squashy tomatoes and brown bananas.

Divide the children into smaller groups. Each team rolls the dice and collects one item from the ingredients along with the relevant numbered section of the story.

Make the pigswill and put the story together. When they have collated the story they can check Luke 15 to see if they got

Section one: Jesus told this story: There was a man who had two sons. The younger one said to his father: “Father, give me my share of your money.” So he divided his money between them. Not long after that, the younger son packed up all he had, set off for a distant country and lost all his money there in wild living.

Section two: After he had spent everything, there was a severe famine across the whole country, and he began to be in need. So he went and hired himself  out to a farmer, who sent him into his fields to feed the pigs. The younger son longed to fill his stomach with the food the pigs were eating but no one gave him anything.

Section three: When he came to his senses, he said: “So many of my father’s servants have food to spare, and here I am starving to death! I will go back to my

father and say to him: ‘Father, I have sinned against heaven and against you. I am no longer worthy to be called your son. Make me like one of your servants.’” So he left  the farm and headed back to his father’s house. But while he was still a  long  way off, his father saw him and was filled with compassion for him. He ran to his son, threw his arms around him and kissed him.

Section four: The son said to him: “Father, I have sinned against heaven and against you. I am no longer worthy to be called your son.” But the father said to his servants: “Quick! Bring the best robe and put it on him. Put a ring on his finger and sandals on his feet. Bring the best food. Let’s have a feast and celebrate. For this son of mine was dead and is alive again; he was lost and is found.” So they began to celebrate.

Section five: Meanwhile, the older son was in the field. When he came near the house he heard music and dancing. He called one of the servants over and asked what was going on. “Your brother has come,” the servant replied, “and your father has put on a party because he has him back safe and sound.”

Section six: The older brother was angry and refused to go in, so his father went out and pleaded with him. But he answered

his father: “Look! All these  years  I’ve been slaving away for you and have never disobeyed your orders. Yet you never gave me even a young goat so I could celebrate with my friends. But when this  son  of yours, who has lost all your money, comes home you have the best  party  for  him!” “My son,” the father said, “you are always with me, and everything I have is yours. But we had to celebrate and be glad, because this brother of yours was dead and is alive again; he was lost and is found.”

Ask the children to think about what is happening in their lives that they don’t want to happen any more. Like the younger broth- er in the story, God has something better for them. Maybe they have felt lonely, have been arguing with a sibling or have joined friends in behaviour that doesn’t please God. They can write these thoughts on the banana skins and mix them into the pigswill.

Then they should look at labels on the bags of Hula Hoops and take the rings from the bags. God the Father swaps the rubbish in our lives for the very best things. They  can choose as many words as are relevant and put them on their fingers.

Invite the children to share about their swap with a partner. Encourage them to pray

for one another that they would know the reality of the Father’s love and acceptance.