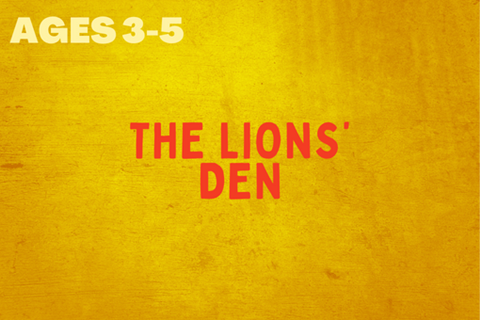 Background: This is a well-known story, but it might be the first time the children in our groups hear it. Daniel has been in Babylon for decades and is now around 80 years old. Throughout his life he has been in mortal danger and under pressure to worship other gods. But Daniel has trusted in God from his youth to his old age. Even in the face of hungry lions, this old man is not going to stop trusting, worshipping, obeying or honouring God.

Welcome the children by name and invite them to join you in your circle. Share out any refreshments you have and chat with the children about the events of their week. If you have done anything out of the ordinary this week, share it with the group (if appropriate). Ask them if they have experienced anything unusual this week. Have they been surprised by something they didn’t think would happen? Or by something they thought would happen but didn’t?

You will need: pictures of different animals, including lions

Spread the pictures of animals out in front of the children and ask them to choose their favourite. Invite them to tell you why they prefer one animal or another. Then ask the group to choose the animal they like the least. Why did they choose that one? Explore ideas of danger or being frightened, but be reassuring as you do so. Be prepared for some very different answers!

Finally, try to order the pictures in order of ‘best’ to ‘worst’ animal. Are you able to come to an agreement? Don’t labour this too hard, as younger children’s negotiation skills aren’t as well developed as older children’s.

Work together to create a den that everyone can fit in. Help the children think about how it must be safe and not collapse on everyone once they’re inside. Spread cushions and rugs out on the floor of the den so you can all sit comfortably. Once you have finished, check to make sure that it’s safe, then admire your creation. Congratulate everyone and go on to tell this story:

Do you remember Daniel? He was a friend of God, but lived in a place called Babylon, where people didn’t know God. Daniel had been standing up for God and refusing to worship any other gods for a long time. And now he was very old.

Daniel was an important man in the kingdom. The king, who was called Darius, had put him in charge. But the other officials were jealous and persuaded the king to sign a law. The law said that everyone had to pray to King Darius, as if he were a god, and no one else. The law also said that if anyone refused they should be thrown into a pit filled with lions! Gesture toward your den.

The jealous officials knew that Daniel would refuse to worship the king. They knew he was a friend of God. They were going to trap Daniel!

Sure enough, Daniel carried on worshipping and praying to God. Everyone mime praying to God. The jealous officials watched Daniel praying. They sneaked back to the king and said to him: “Didn’t you make a law that everyone had to pray to you? And that anyone who refused should be thrown into a pit filled with lions?”

“Yes,” said the king. “I did exactly that.” “Well,” said the officials, “we’ve seen Daniel praying to his God!”

The king was very upset. He liked Daniel and realised he had been tricked by the jealous officials, but the law couldn’t be changed so the king ordered that Daniel be thrown into the pit. Encourage everyone to crawl inside your den.

The king thought the lions would kill Daniel, but God sent an angel to stop them eating him. Daniel trusted God and God saved Daniel!

The king couldn’t believe it! In the morning he ordered that Daniel be brought out. Everyone leaves the den. Then he sent out an order that everyone should pray to God, and only God!

Chat about the Bible story using these questions. Try to involve all the children in the discussion:

Give out the simple eye masks and show the children the craft materials and the picture of lions. Challenge them to decorate their mask to make it look like a lion.

As you work, chat about the story. Ask the children how they would have felt if they were in a den with lots of lions. Do they think God would save them? Have a story prepared about when you stood up for God and trusted that he would stand up for you. This will help the children contextualise the story in a world they understand.

When you have finished, put on your lion masks and roar!

You will need: praise music and the means to play it

Chat to the children about the different ways we can thank God for being trustworthy and reliable, and for standing up for us. Think about times when we might have to stand up for God this week, and times when we might feel scared and need God’s help and comfort. Invite them to share and then say a simple prayer asking God to be with us and help us during those times.

To finish, play your praise music. Encourage the children to dance and sing, thanking God for being with us. They could even wear their lion masks from ‘Creative response’!