By Jenny Cheung is a schools’ worker with Scripture Union Scotland, leads the children’s team at CLAN Gathering (New Wine Scotland) and is a volunteer on a youth residential for Scripture Union England and Wales. 2018-02-20T00:00:00+00:00 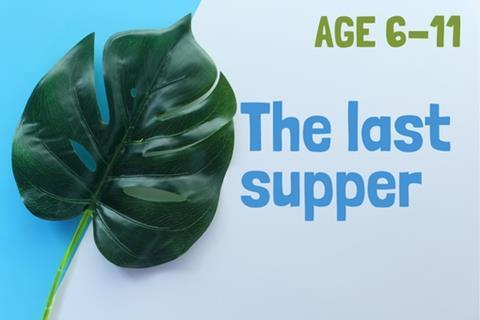 Background: Jesus is preparing to complete the rescue plan to bring his people into a forever relationship with him. It’s the time of Passover, when Jews remembered how the blood of innocent lambs protected them as God brought them out of slavery in Egypt. Unbeknown to the disciples, Jesus is about to show how these events were a prophetic foreshadowing of what they will see unfolding before them in the next few hours.

As you begin the session, invite the children to sit together in a circle and pass round a simple object. When a child has the object, they can share their response to the question. Sometimes it’s helpful to have a sand timer so you have time for each person to share if they want to. If a child doesn’t want to say anything, they can just pass on the object. Ask the children what tradi­tions they use to celebrate or remember certain things in their families.

You will need: story sections printed out (one set per small group)

Put the children into small groups (or work collectively if your numbers are low). Give each group a set of these story sections to put in the right order:

Spread the tablecloth on the floor and ask everyone to sit around the edge. Set out your flatbread and grape juice. Explain that the story you’ve just pieced together was so important to God’s people that they celebrated it every year with a special meal called the Passover.

We saw last time how Jesus washed the disciples’ feet at the start of the meal. He continues to do some surpris­ing things as they eat together. At the Passover meal, Jewish people ate (and still eat) specific foods in a certain order and also drank wine at particular points. The meal tells the story of how God rescued his people from Egypt. Jesus and his disciples knew exactly how this worked as they would have done it every year since they were children.

However, this time was different. Jesus started the meal by telling the disciples one of them was going to betray him. They were upset because they couldn’t imagine how that could possibly happen. But one of them, Judas Iscariot, knew very well. We don’t exactly know why, but Judas had become disillusioned with Jesus. Perhaps he thought Jesus was going to overthrow the Romans, or maybe there was another reason, but whatever it was Judas had agreed with the chief priests to sell Jesus out and make it possible for him to be arrested.

Of course, no one except Judas and Jesus (who knows everything) knew this during the meal. Jesus picks up the bread, thanks God, breaks it and tells the disciples it is his body. That’s a bit odd. Break the bread you have and give a piece to everyone.

Then it gets even weirder. Jesus picks up a cup of wine, tells everyone it’s his blood – the sign of a new promise to God’s people – then offers it around. Give everyone some of your blackcurrant juice.

At some point during the meal, Judas sneaks off to betray Jesus. Peter and Jesus have a conversation where Peter promises that he will never betray him, but Jesus explains that Peter will say that he doesn’t know him three times before the night is over. All in all, it’s a very strange meal.

At the end of the meal, they sing a hymn together. You could sing a familiar worship song at this point. Then they leave and go to a place they know called Gethsemane. Jesus goes off by himself to pray for a while, then Judas shows up with some soldiers who arrest Jesus and take him away.

Ask the children these ques­tions, encouraging everyone to take turns to contribute:

Show the children how to draw a line round the outside of the wine glass and then colour beneath it so that it looks like a glass of wine. Let them continue to talk about the story as they do this. Prompt them to chew over the question of why blood is important in both stories.

Ask the children to find a space, get comfortable and close their eyes. Read Mark 14:17-18 and 22-24. Read slowly and leave a gap after each bit, encouraging them to imagine they are part of the scene and to have a conversation with Jesus in their hearts.