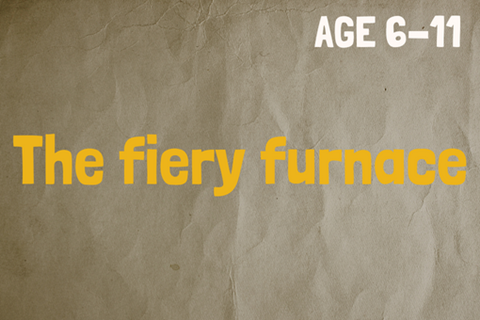 Background: We’re still in Babylon, a hostile territory ruled by the cruel and unpredictable King Nebuchadnezzar. This story concerns the three faithful Jews who supported Daniel in prayer when all the king’s advisers looked to him to interpret the king’s dream and save them from execution. This time the trio find themselves on their own and face another threat to their lives.

As the children arrive, chat about the physical activities they have done this week. Explain that they will be moving about and using their bodies a lot today, so start with some simple stretching – up high, down low, out to the sides – followed by loosely shaking each arm from fingertips to shoulder, and each leg from toes to hip.

You will need: a selection of “Would you rather…?” questions

Sit the children down to begin with. Invite them to vote by standing up for the first option and staying seated for the second option. Chat about why they made their choice.

You will need: three freeze-frame descriptions on cards (see below)

Make three cards, each bearing one of these descriptions: “Four people alive and singing inside a giant oven”, “Three men standing while everyone else is bowing down” and “Two men making a giant bonfire that’s burning seven times hotter than it should be”.

With no introduction, give the freeze-frame descriptions to the group and ask them to create the scene as if they’ve paused a film. They can use their bodies, gestures and facial expressions to tell that particular moment of the story in whatever way they choose. Emphasise that they do not have to know the story: they are imagining the freeze-frame in their own way. If you have a small group, create each freeze-frame together in turn; if you have more children, they could divide into three groups and create one each.

Show each freeze-frame to the group and wonder together: who might these people be? What could be happening here? How do you think these people are feeling? What might happen next? Decide together which order the freeze-frames should appear in. Some children might recognise this Bible story, while others might come up with wild interpretations. Accept every answer with enthusiasm, as the aim here is to engage the children in the dramatic moments of the narrative. Go on to tell this story:

King Nebuchadnezzar was the cruel and crazy king of Babylon. If people disagreed with him he killed them in horribly inventive ways. Once he built an enormous gold statue and ordered everyone to bow down and worship it. He threatened to throw them into his fiery furnace If they didn’t. It was like a giant pizza oven, full of fire and big enough to swallow several people whole!

The statue went up and everyone in Babylon fell down on their faces to worship it. Everyone apart from three faithful Jews called Shadrach, Meshach and Abednego, that is. They would only worship God, so they stayed standing. Show the first freeze-frame.

“Worship my statue,” ordered the king, “or else I’ll throw you into my fiery furnace!”

“We love God,” replied Shadrach, Meshach and Abednego. “He can save us from your fiery furnace. Whatever happens, we’ll never worship your statue!”

The king was furious and ordered that his fiery furnace be heated up seven times hotter than it normally was. Show the second freeze-frame.

The king’s guards threw Shadrach, Meshach and Abednego into the giant oven. It was so hot the guards were eaten up by the flames! The king listened for screams, but instead he heard singing. Impossible! He peered into the fiery furnace and saw not three people but four! And the fourth shone like a star with a fierce white light, beautiful and terrifying at once, like no human being the king had ever seen. Show the third freeze-frame.

The king ordered Shadrach, Meshach and Abednego out of the fiery furnace. When he saw that the fire hadn’t even touched them he praised God, saying: “Only Shadrach, Meshach and Abednego’s God could have done this amazing thing! He sent an angel to save his servants. Anyone who doesn’t worship this God will have their arms and legs pulled off, and their houses knocked down!”

You will need: glossy magazines; a large sheet of paper; glue sticks and scissors

Ask the children to think about things the world wants us to worship today. Use the magazines to spark ideas, cutting out objects that invite us to worship them: expensive cars, the latest mobile phone, the glossiest hair. Make a collage of these objects in a totem-pole shape to echo the king’s gold statue. As you do so, encourage the children to talk about school. Do they and their classmates think the same things are important? Talk about their experience of being a Christian at school.

Invite the children to stand up and join in with the actions in bold: “God, sometimes we want to sit down and stay quiet about believing in you. Help us stand up for what we believe, be strong in our faith and bow down only to worship you. Amen.”