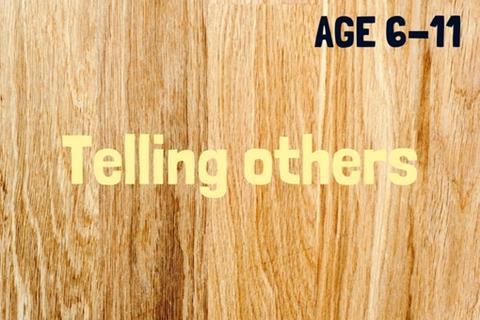 BACKGROUND: We all have our preconceived ideas, sometimes subconsciously, about who might make a ‘suitable’ follower of Jesus. Peter certainly did, and we are no different! Allow God to speak during your preparation for this session and to show you his heart for others.

Welcome the children as they arrive and share out any refreshments you have provided. Chat together about what has happened since you last met. Share in the triumphs and difficulties of the children’s lives and discuss something appropriate from your own life. Ask the children to tell everyone about their favourite foods and the foods they dislike the most.

Divide into two teams and arrange each team so that they are all standing in a line facing the same way except for the person at the front of the line, who faces the opposite way.

Whisper to this person an action to mime, for example riding a bike, swimming, peeling a banana, brushing their teeth or taking a selfie. This person turns and taps the next person on the shoulder and performs the mime. The action is passed down the line until the last person is reached and they have to guess the original action. The first person then goes to the back of the line and play begins again.

You will need: items for each group to wear that distinguishes them from the others; a white sheet; card; pens; paper plates

You are going to retell the story in modern- day terms, involving the children in creating it.

When a word is in bold below, replace it with the name, place or item chosen by the group.

Cornelius was a centurion in the Roman army. He was not Jewish, but he lived in a place called Caesarea in Judea. He loved God.

Peter was a Jew and a disciple of Jesus.

Ask the children who this would be where they live. Two different schools? Two different neighbourhoods? Decide on local places to represent Caesarea and Joppa. What would Peter and Cornelius be called today?

What types of food do  the two  groups like to eat? Divide everyone into two groups, standing on separate sides of the room with a divider down the middle. Give each group some card and ask them to create a place name sign. They can draw their group’s favourite foods on the paper plates.

An angel appeared to Cornelius and told him to send some servants to a place called Joppa. They were to find a man called Peter and bring him to Caesarea.

Meanwhile in Joppa, Peter was peckish.

While he was waiting for his food, he had a vision from God. In his vision, a large sheet was unravelled from heaven. Hold a

large sheet over the group. On it was all the food the people from Caesarea ate. Place the paper plates on top. It was completely against Peter’s beliefs to eat this food. It was unclean! But he heard a voice saying to him: “Get up and eat it.” Ask the group what they think Peter said in response.

The sheet was lowered three  times, with the same voice telling him to eat. Just as he was trying to understand what this vision meant he heard a knock at the door. Send some of the group over to the other side of the room.

The Holy Spirit told Peter to go with these men because they had been sent by God. So, with a bunch of others from

Joppa, he began the journey. Cornelius was expecting them and had gathered a crowd  to welcome them. What do you think they did when they arrived? Would it have been awkward?

Going inside the house, Peter reminded them that it was against Jewish law for him to visit the house of a Gentile. But God had shown him that he shouldn’t call anyone impure or unclean, even Gentiles! Cornelius told Peter about his visit from the angel,  and they were all astonished.

Peter realised the good news about Jesus wasn’t just for the Jews. As he was talking the Holy Spirit came upon them, and they all started speaking in other languages and praising God together. How strange would that have been? Can you imagine this happening today?

The people from Caesarea were baptised in water. If you are able, throw some water over the group. The Church began to grow, with Jews and Gentiles alike hearing and sharing the good news about Jesus!

Continue chatting about the story, using these questions and others to stimulate discussion:

You will need: a white sheet; pens; small squares of material; music and the means to play it

Spread the white sheet out on the floor. Explain that God asked Peter to speak to the people Peter hadn’t originally thought were worth talking to about Jesus. It was uncom- fortable for him, and maybe he was scared.

Give out the squares of material and pens. Play some reflective music and invite everyone to take a quiet moment and ask God what he wants them to do. Explain some of the ways we can hear God through thoughts, pictures, Bible verses and words, for example.

They should write or draw on their materi- al what they have heard and place it on the larger sheet. They can take these squares home to show their parents or carers.

You will need: balloons; pens; music and the means to play it