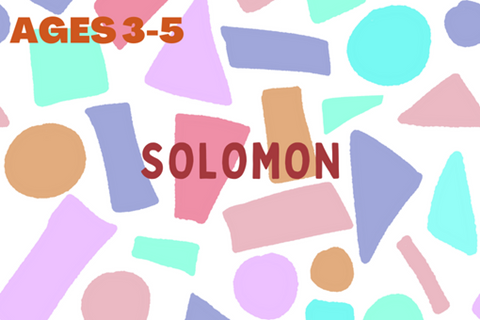 As you begin the session, invite the children to sit together in a circle and welcome parents to join you for this time, if appropriate. Chat about these questions with the children:

You will need: wooden bricks; balloons and spoons

Ask the children to build a tower out of bricks, balance a balloon on a spoon or perform a hand stand / cartwheel - anything which requires a physical skill. Would you say someone who can do this skill is someone who is very wise? What do we mean by wisdom?

You will need: newspaper or wrapping paper; pictures from youthandchildrens.work/links; satsuma; sticky tape; music and the means to play it

Cut up the pictures along the lines. Wrap the satsuma in paper, then put eight more layers of paper onto the parcel, including one picture between each layer, starting with picture number eight and finishing with number one.

Sit the children in a circle and play the music, stopping to allow a child to remove the first layer to then show the picture in that layer to everyone else. Repeat this using the pictures to tell the story as follows. Ensure no child opens more than one layer (unless there are fewer than nine children).

Picture 1: King Solomon, David’s son, had become king. Solomon loved God and wanted to do the things that pleased God. King Solomon felt a bit scared at what it was like to be a king. One night he was lying down fast asleep (he probably didn’t really wear his crown in bed!).

Picture 2: While he was sleeping, King Solomon had a dream. In this dream, God spoke to him: “What do you want, Solomon?” God said. “Ask me for whatever you want and I will give it to you.” (God doesn’t really live in the clouds but we don’t know what God looks like!)

Picture 3: In his dream, Solomon thought hard. He felt so young and inexperienced. How could he ever be a good king?

Picture 4: Solomon thought hard again. What he wanted most was to know what was the right thing to do and what was the wrong thing to do. He wanted to be wise, to do what God wanted him to do. If he wasn’t wise, he knew he would be a bad king. So, he asked God to give him wisdom.

Picture 5: God was very pleased that Solomon had asked to be given wisdom, to know the difference between what was right and what was wrong. There were lots of other things he could have asked for. God said he would give Solomon wisdom. He would be the wisest person alive.

Picture 6: God also said he would make King Solomon rich. He would have lots of money (point out the money bags) and possessions and land.

Picture 7: God also said that if Solomon obeyed God, like his dad King David had done, he would live to be very, very old - more than 80 years old!

Picture 8: When Solomon woke up, he was very, very happy. He wanted to thank God for giving him wisdom and so much more. He stood up and raised his arms and praised God. “Thank you so much, God!” he shouted out.

Satsuma: King Solomon was so happy at all that God had promised to give him that he invited all the people around him to a great party. Divide out the satsuma among the children. (If there are more children than segments in one satsuma, provide more satsumas.)

Give out the crown shapes and encourage the children to draw on their crown something they want to ask God to give them. They should go on to decorate the crown however they wish. As you work, chat to the children about the story and what they think of Solomon’s choice.

You will need: Satsumas