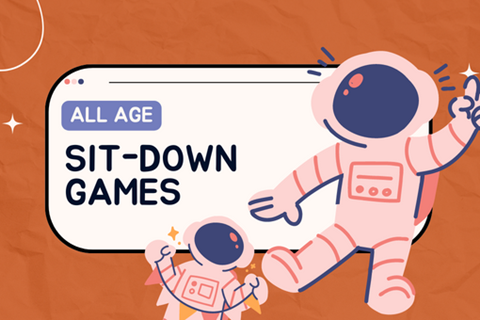 Not every child or young person is able to or enjoys running around, and not every context lends itself to a noisy and active game. Here is a range of ‘sit-down’ games you can play if space is limited.

You will need: pens; paper; dice; tables and chairs

This traditional game is easy to set up and fun for children to play. Divide them into groups of four and sit each group around a table. Give every child a pen or pencil and a piece of paper. The aim of the game is to draw a whole beetle by throwing a die. When a player throws the following number they should add the corresponding body part to their beetle: 1: eye; 2: antenna; 3: leg; 4: wing; 5: head;   6: body. Each player throws the die once before drawing on the appropriate body part and passing the die on to the next player.

Each player must first throw a six and draw a body before they can add any other parts. To win, the player must have one body, one head, two eyes, two antennae, four wings and six legs.

For a longer game, have a beetle drive. The first player to finish their insect shouts: “Beetle!” This stops all the games. The player with the most complete beetle in each group of four moves on to the next table and play begins again.

Before the session, prepare some bingo cards using celebrities’ faces instead of numbers. Make sure you use celebrities your  group will recognise. Create the cards so that they are all different. Put a picture of each celebrity you have used into the bag.

Give out the cards and bingo daubers (you can use felt-tip pens if you don’t have any daubers). Draw out the celebrities’ faces one by one and announce the names. If a player has that celebrity on their card they should cross the relevant name off.

The first aim is to cross off the celebrities that appear in each corner of their card, the second is to fill a whole line. Finally, players should fill the whole card. Award small prizes for the first players to achieve these goals.

You can tailor your bingo cards to fit the theme of your session, for example using Bible characters or books of the Bible to tie the game into your spiritual programme.

You will need: Lego bricks and bases (or similar); stiff cardboard Divide the children or young people into pairs. Give each player a Lego base and some bricks. Get them to sit across a table from their partner and stand a large enough piece of stiff cardboard between them so that they can’t see one another.

Encourage one player in each pair to build a simple model from the Lego. This player then has to describe to their partner how to make that model using only words. Give the pairs enough time

to complete the challenge, then see which pair has been most successful in recreating their model.

Alternatively, if your Lego supplies aren’t enormous, make a model before the session and place it somewhere out of sight (for example in a corridor or behind a cupboard). Invite one player from each pair to look at the model, then go back to their partner. They have to describe the model while their partner builds it according to their instructions.

Choose one or two children or young people to be the doctor(s) and send them out of the room. The rest of the group sits in a circle and decides on an amusing affliction they are suffering from. This could be something such as believing they are Ronald McDonald, or they could suddenly only have the ability to speak French. Once decided, invite the doctor(s) back in. They have to ‘diagnose’ the rest of the group by asking them questions. Once they have successfully diagnosed the condition, play again with different doctors.

MAKE A WORD, MAKE A STORY

You will need: Scrabble or Bananagrams tiles; pens and paper

Give the children or young people a number of letter tiles from a word game such as Scrabble or Bananagrams, and encourage them to make words out of those tiles. Make sure any players with dyslexia or who struggle with literacy get the help they need to play.

Once everyone has used all the tiles they can, move the players into groups of four and give each group a piece of paper and a pen. Challenge the groups to put all the words they have created into a very short story. Circulate around the groups to provide any help needed and to ensure that everyone’s ideas are heard.

Once the groups have completed their stories, read them out.

You might want to award prizes for the most inventive, the story that includes the most of the group’s words and so on.