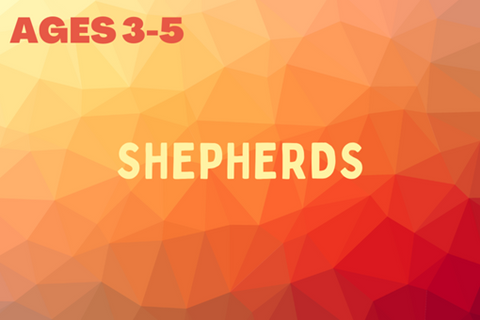 Background: Children may not know much about what t was like for shepherds in ancient times. Their status was pretty low in society (King David, the very youngest son, was given the least significant and potentially most dangerous job of looking after the sheep). Shepherds didn’t own the sheep they cared for, and they lived out in the open.

Welcome the children by name and share out any refreshments you have brought. Talk about the times when the children are in a hurry: when they are late for school, to catch a bus or train, to go to a special party or to meet a favourite person. Sometimes we’re in a hurry because we’re late, or because we’re keen to get somewhere, or maybe because we just like running!

You will need: two (or more) toy sheep

Divide the children into two (or more) equal-ability teams with half of each team at different ends of the room. Run a couple or more relay races with each child running to the other end to hand the sheep to the next person, who then carries their sheep back again. They could run for the first race, jump for the second and jump sideways for a third, for example.

You will need: a wooden shepherd’s crook (or a photo of one), a wooden stave or a walking stick; toy sheep or sheep puppets

Ask the children if they have been out at night in the last week. What was it like? Has anyone been outside all night? If you had been, what do you think that would be like?

Explain that some people work outside at night-time, for example paramedics, people who repair motorways and train tracks, and farmers at lambing time. At the time Jesus was born, shepherds had to stay outside at night-time to make sure the sheep were kept safe from wild animals and were not stolen by thieves. It was not a very nice job because they got cold and didn’t get paid very much. Show them the shepherd’s crook and talk about how it was used. They were very ordinary, poor people. Tell the children this story:

The night Jesus was born, there were some shepherds protecting their sheep in the fields near Bethlehem. They were cold and tired, and probably bored. Encourage everyone to shiver, yawn and pull a long face. But they were in for a surprise. There are lots of surprises in the Christmas story! Suddenly, there was a very bright light in the sky, so bright that they all screwed up their eyes and then covered them with their hands. Everyone does this.

The shepherds saw an angel in the sky. Everyone opens their mouths wide.

Can anyone remember what angels usually said when they met someone? “Don’t be afraid?” That’s what this angel said. Then the angel said a lot more…

“Here’s some good news. Today, in the town of Bethlehem, close by, a Saviour has been born: someone who is going to change the world for ever. He has come from God. He’s a newborn baby right now, wrapped up tightly in cloths and lying on a bed of hay in a manger to keep him safe and warm!”

And then there was a giant choir of angels in the sky, singing joyously and beautifully, all praising God together. It was so loud that the shepherds half-covered their ears. It was so loud it almost hurt, but they wanted to hear it anyway! Everyone half-covers their ears. They sang, “Praise God in heaven! Peace on earth!” again and again and again.

And then it went quiet and dark again.

The shepherds jumped up, each grabbing their shepherd’s crook and grabbing a small lamb, and began to run. Everyone gets up and runs on the spot – faster and faster! They were desperate to see this newborn baby.

They found Mary and Joseph beside the baby lying in the manger, just as the angel had told them. Everyone pants for breath. They all spoke at the same time to tell Mary and Joseph about the angels and the singing and the brightness, and what they had been told about the baby. It had all come true. They were ordinary people and they were among the first to be told the great news about Jesus! Mary and Joseph listened carefully and were surprised at what the shepherds said. Mary was very thoughtful. What did all this mean?

Ask the children these questions, ensuring that everyone has the chance to contribute:

If you’re using pipe cleaners, bend them into the shape of a crook. Cover the wrapped candy cane or pipe cleaner with paper, glitter and so on, so it can hang on a Christmas tree. As you work, chat with the children about what God is doing in the story. Have they discovered anything interesting today?

You will need: canes from ‘Creative response’; song words and advent ring instructions from youthandchildrenswork/links

Light the third candle on the advent ring and remind the children of the stories behind the first two. Sing the first four verses of the song.

Everyone stands up, holding their tree decoration. Then pray:

“Thank you, Lord Jesus, that we’ve heard the story about what the angels told the shepherds. Thank you that we too can tell others about what happened to the shepherds. Help us to share the Christmas story with our friends and family. Amen.”