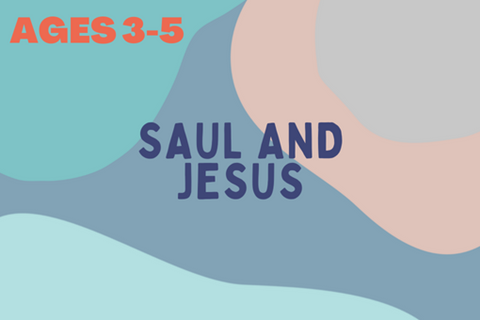 Background: Saul was the most feared man in the community, known for “breathing out murderous threats”. Determined that he was walking God’s way, his life took a dramatic turn when he encountered Jesus for himself. This all-transforming meeting changed not only the course of Saul’s life, but the movement of the early Church.

As you begin the session, invite the children to sit together in a circle. Ask them how they have changed in their lifetime. How are they different from when they were babies? Did they notice these changes taking place? Explain that today you will be exploring a story about someone who changes dramatically, not just gradually, when he met Jesus.

Set up a simple obstacle course in the room. Invite the children to take turns to wear a blindfold while the others take turns to give instructions that will help steer the blindfolded child around the course. Give everyone who wants to participate the opportunity to attempt it. You could either do it as a single course or, if you have a large group, set up two lanes and run this activity as a race. Make sure you risk assess the course and don’t make anyone play if they don’t want to.

You will need: a storyteller to play the part of Saul and learn the script; a simple, appropriate costume

Seat the children on the floor together in front of Saul, who should tell the story as follows:

Hello, my name’s Saul. I’m nothing like I used to be! My life has completely changed; turned around, you could say! Let me tell you all about it.

I’ve always done my best to follow God. I got quite worried when I heard all these people talking about Jesus. I thought they were out to cause trouble and I really didn’t think God would be happy about the things they were saying. I decided to sort it out for God and put a stop to them, just as I thought he would want me to. So I made sure as many of them were arrested as possible! I was doing such a great job till something stopped me right in my tracks!

I was on my way to Damascus to seize more prisoners, just travelling along the road, when suddenly there was the brightest light ever shining in my eyes, as though it came from heaven above! I fell to the ground and covered my eyes, and then I heard the strangest voice!

Then the voice told me it was Jesus himself! He said that when I got to the city he would tell me what I needed to do.

When I stood up I couldn’t see a thing. I was completely blind! It was a good job there were other people with me who could help me find my way to Damascus. Mind you, they didn’t say a word the whole way there. I don’t think they could believe what had happened either!

They helped me find somewhere to stay in the city. I just sat in the room and thought and prayed and wondered. I didn’t know what was going on. Then, one day, a man called Ananias came to see me. It was a very brave thing to do. Only a week earlier I would have been hunting men like him down and locking them up!

Ananias was very brave and very loving. He put his hands on my eyes and prayed, and then I could see again! Everything changed in that moment. I realised I hadn’t been doing what God wanted, but quite the opposite. I shouldn’t have been hunting down the Jesus followers; I should have been telling other people about Jesus. So that’s exactly what I do now, and it’s a whole new adventure!

Attach two large pieces of paper to two opposite facing walls and lay the rest of the materials out in the middle of the room. Explain that you want to create two posters that tell the story of Saul. Write ‘Before’ on one and ‘After’ on the other.

Invite the children to work together and use the materials provided to complete the two posters, adding appropriate words and images from the newspapers and magazines, and using the pens to draw their own ideas. Encourage them to work freely, encouraging and assisting them as needed rather than intervening too soon.

When you are finished, gather the children in the centre to look at the two posters and talk about how they contrast with each other.

Sit the children down together to pray. Hold up the appropriate sign as you do so:

Father God, who stopped Saul on his road to destruction, stop us when we are doing things that cause you hurt.
Hold up the Stop sign

King Jesus, who turned Saul’s life around, show us the things that need to change in our lives.
Hold up the U-turn sign.

Holy Spirit, who empowered Paul to take the gospel message out into the world, give us courage to tell others about you.
Hold up the Go sign.