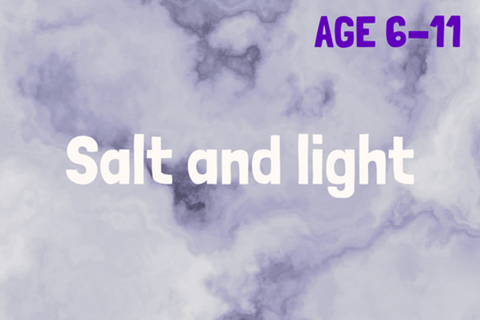 BACKGROUND: Jesus has spoken to his disciples about living in a way  that’s radically different to the world’s in the Beatitudes. He goes on to paint some pictures of how his followers’ lives act as salt and light to the world around them.

Salt was much more significant in the ancient world than it is today. In fact, we are encouraged to eat less of it today!

Conversely, Roman soldiers received their wages in salt, Greeks believed that salt was somehow divine and the Jewish sacrificial laws included salt. Before the age of refrigeration, it was used to preserve food and prevent decay, so when Jesus told his disciples they were salt it would have been significant.

Light is an easier thing for us to connect with as a concept from our modern viewpoint, although our light sensitivity has perhaps been dulled somewhat by light pollution and our ability just to flick a switch and send the darkness packing. Maybe we don’t have such a sense of darkness as the first disciples did.

As you begin the session, invite the children to sit together in a circle and pass around a simple object. When a child has the object they can share their response to the question. Sometimes it’s helpful to have a sand timer so you have time for each person to share if they want to. If anyone doesn’t want to say anything they can just pass the object on. Ask the children to  share what their favourite savoury snack is.

You will need: salt and shake crisps; blindfolds

Ask for some volunteers who don’t mind being blindfolded. Blindfold the volunteers and tell them you’re going to give them two crisps. Let them try one crisp without salt and one with it. Talk about which they prefer and why, then take off the blindfolds. Is it nicer being in the dark or the light?

You will need: A3 paper (or larger, de- pending on the number of children in each group); marker pens

Divide the children into small  groups  of four or five (or stay together if you have a smaller group). Give each group a big piece of paper and some marker pens. Ask them to write a list of what we use salt for. Then ask them to write a second list explaining why light is important.

Draw the group back together and talk through their lists. Read (or ask someone else to read) Matthew 5:13-16. Have them look at their lists a second time in groups, and circle or underline any ideas that might connect with them being salt and light as Jesus says they are. Gather together and share those ideas. Unless your group has particular knowledge of salt in ancient times, you might like to share some of the ideas from today’s background notes with them to help develop further understanding.

You will need: flour, salt, water and bamboo skewers; tea lights (real or battery-operat- ed); access to an oven (optional)

Before the session, make salt dough by combining one cup of salt, two cups of flour and three-quarters of a cup of  water.

Give everyone a fist-sized piece of dough and show them how to push their thumbs into the top to make a simple pot. They can then mould their pot as they like, but it needs to be big enough to contain a tea light once it’s hardened. A bamboo skewer can be used to push holes though in a pattern, so that when the tea light is lit the light will spill out from the holes. The salt dough can be hardened in the oven at 150°c for 30 minutes or left to dry out for several days.

As you work, chat about what the children have discovered today and the practical outworkings of being salt and light in their lives. You might want to share examples from your own life.

You will need: salty snacks (small crackers or similar; tea lights (real or battery-operat- ed); music and the means to play it

Create an atmosphere of calm by putting on some music and dimming the lights. Invite the children to reflect on being salt and light as they taste a salty cracker, then light a candle.

Pray, asking God to help them recognise the moments when they are being salt and light in the week to come.

JENNY CHEUNG is a mum, church planter and choir nut! She pioneers The Voice Project Scotland: a missional expression inviting children and their families to find their voices