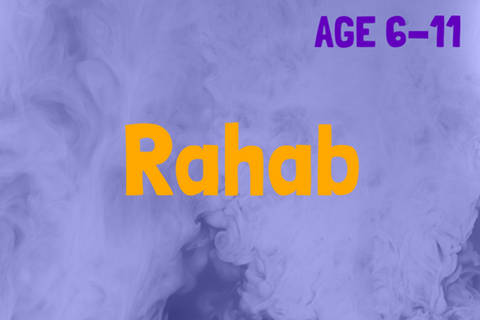 BACKGROUND: The story of Rahab tells of a woman brought up in a non-believing society who was prepared to risk her life in order to stand out for God, protect his people and play a part in his big story. As Christians, we are also called to stand out for God, and to live courageously and often differently from those around us.

It’s worth noting that the passage mentions that Rahab is a prostitute. You can choose whether or not to give this attention depending on your group, but you may need to be prepared to explain it if the children ask. You could say that  it meant she had the kind of relationship God planned for married people with lots of people she wasn’t married to. With older children it could be explored further as a good example of God using imperfect people.

Gather the children together for a time to catch up, build relationships  and  reflect on the week just gone. Have people share exciting news such as birthdays, trips or events. You might like to use the following question to start the conversation as a light-hearted way into today’s theme: “If you could be a spy or a secret agent, what cool gadgets would you choose?”

You will need: popcorn kernels; a marker pen; small containers; a timer

Before the session, colour in three to five popcorn kernels with the marker pen and place a pile of popcorn kernels into a small container. Show the group the kernels you have made a different colour, then drop these into your container and mix them up.

Challenge the children to take it in turns  to see how many of the coloured kernels they can find in 20 seconds. If you have large numbers you might like to do this in smaller groups so that more children get   a turn. Make the link with the group that, just as the coloured kernels stand out and are different from the rest, today’s passage is about someone who stood out by living courageously and differently  compared with those around her.

You will need: a Bible

Split the children into groups of five or six, and explain that as you read through the story you are going to pause at various points and ask them to create a specific ‘freeze-frame’ (a frozen picture showing a situation). You might like to show them a quick example, such as a freeze-frame of  a dinner party. Encourage them to think creatively about how they use their bodies to be people or objects. In the dinner example, some people could link hands in an archway to be the house, while someone else uses their back as a table for others to pretend to eat from.

Wonder with the children about how Rahab might have come to believe in God even though she was living in a city where people didn’t. Ask the children to think about how it might have felt to be the spies on their mission. This passage doesn’t make many explicit references to God or his actions, but ask the children where they see him in this story and what they think it could teach us about his character or his actions.

Use the following questions as prompts for discussion. Encourage the children to think about what the passage might be saying to them and how it could be applied to their everyday lives. Try to encourage wondering, reminding them that there isn’t necessarily  a single right answer.

You will need: paper; pencils; art materials Encourage the children in small groups to think up a modern-day equivalent of Rahab’s story: a situation where God might ask a Christian to courageously stand out or do something different from those around them.

Once they have come up with a contemporary story, encourage them to create small dramas or comic strips to present their scenarios to the rest of the group. When they have finished, invite the group to share what they have been doing if they would like to.

You will need: red embroidery thread; keyrings (optional); worship music and the means to play it

Provide the children with some red embroidery thread and encourage them to plait it into a bracelet or decoration for a keyring. It might be helpful to tie the threads together and tape one end down on a surface to secure them while they plait. As they do  this, encourage them to chat to God about how they could live differently compared with those around them. You might like

to play some gentle worship music in the background while they do this. The children can take their ‘ropes’ home with them as a reminder of this prayer and today’s session.