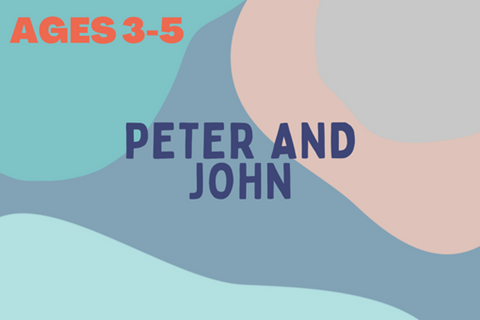 Background: This story takes place in the early days after the events of Pentecost. Filled with the power of the Holy Spirit, Peter and John are transformed from being fearful followers of Jesus hiding in upper rooms to confident leaders of the early Church, walking the same streets they had walked with Jesus and following his example.

As you begin the session, invite the children to sit together in a circle and share out your refreshments. Ask them to tell you about something kind they have done for someone else this last week, or something kind someone has done for them. How do we feel when people do something kind for us?

Play a simple copying game. This could be the well-known game Simon Says or the Follow the Leader circle game, which runs as follows:

One player (A) is selected and leaves the room briefly, while another player (B) is chosen as the leader. When player A returns, all the players in the circle should be copying the actions performed by player B, such as clapping hands, stamping feet, tapping heads etc without revealing which player they are copying. Player A has three attempts to guess the correct identity of player B before swapping to another player to repeat the game again.

Gather the children in a circle around the space where you will tell the story together. Explain that before you begin you would like them to help you set up a simple town scene with the building blocks, and people around and about it. Ensure that you include a structure to represent the temple with a clear gate, and lay a play person down beside it.

As you physically set up the story scene, share the background to the story by saying something like:

Our story today took place not long after Jesus had returned to heaven and had sent the Holy Spirit to be with the disciples. This is a story about something that happened to two of Jesus’ followers, Peter and John. I wonder how they were feeling. I wonder whether they had been there before with Jesus. I wonder what they were doing on this day when they went to the temple.

Invite the children to share some of their ideas, and talk about these and any issues or questions raised. Tell the following story, moving the play figures around the scene as appropriate:

Peter and John were walking to the temple one day to pray, as they often did, when they saw a man lying next to the gate, which was called ‘Beautiful’. This man could not walk, so in those days this meant he couldn’t work either. He often sat next to the gate asking people for money to help him.

The man asked Peter and John for money and they knew what to do straight away: do what Jesus would have done! Before Jesus had returned to heaven he had told them they would receive the Holy Spirit, and then they would be able to do the things he did. Peter had no doubt about what Jesus would have done if he had been talking to the man. He held out a hand and said to the man:

“We don’t have any money to give you, but we do have one thing we can share. In the name of Jesus Christ of Nazareth, rise up and walk!”

The man couldn’t believe what he was hearing, but Peter sounded so confident he didn’t hesitate. Stretching out his hand and taking hold of Peter’s, the man stood to his feet! It was the first time in his life he had been able to do that! He couldn’t believe it! He was so overjoyed, he walked and he ran; he leapt and he danced! Oh, how wonderful! The man was well again!

Many people saw what had happened and gathered around. Peter stood up and said: “Why are you surprised? It is Jesus who has healed this man, just as he said he would!”

You will need: blank cards and envelopes; a selection of craft materials

Invite the children to use the craft materials provided to make a card for someone they care about. This could be a ‘get well soon’ card, a ‘thinking of you’ card or simply a ‘thank you for being my friend’ card. As you create these cards, talk about how we can show people we care for them, as Jesus did. At the end of the session, encourage the children to take their cards away to give out.

Sit the children down together and talk about how Jesus says we can still ask him to make people well again today. Ask the children if there is anyone they would like to pray for, either themselves or for a friend or family member. Model how to pray for healing and invite the children to pray aloud. Take some time to talk about how we don’t always see healing, as we may hope to, but that God holds each of us in his hands and cares for us all. Let the parents know that this is what you have been praying for in this session so they can follow up with their children.