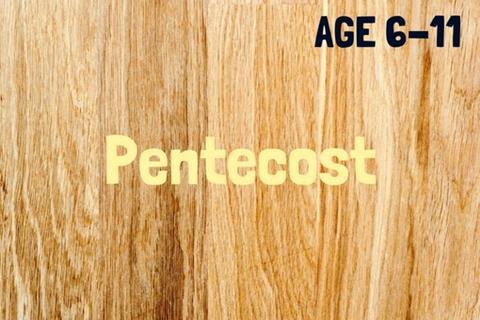 BACKGROUND: We all have different experiences of the Holy Spirit, but it’s clear that God intends us to rely on his power to live as followers of Jesus. Use your preparation time to invite the Holy Spirit to strengthen and help you in your own life.

Welcome the children as they arrive and share out any refreshments you have provided. Chat together about what has happened since you last met. Share in the triumphs and difficulties of the children’s lives and share  something  appropriate from your own life. Chat with the children about their best friends. What do they like about them? What would life be like without them?

You will need: a bucket; lots of small balls Place the bucket full of balls in the middle  of the room. One player must attempt to empty the bucket while everyone else tries to refill it. Change the ‘emptier’ frequently to keep the game moving.

Alternatively, if you are able to go outside, divide the children into two teams and stand the teams in lines. Place a   bucket full of water and a sponge at one  end of each line with an empty bucket at  the other end. The player next to the bucket should fill the sponge with water and pass   it down the line. The player at the end squeezes out as much water as possible into the empty bucket before passing the sponge back to the start. The team with the most water in their bucket when the time limit is up are the winners!

You will need: two dice; music; the story sections below on numbered cards; blank paper; pens

Place two sets of the story sections (numbered one to five below) at the front   of your space. Divide the group into two teams and sit each team in a circle. Give each group a die. Play the music, passing the die around the circle. When the music stops, a team member should throw the die and run to collect the corresponding story section from the front. When teams have collected all the sections, they should order the story and guess what happened next.

Listen to both versions of the story, then read the passage out from the front to check that the groups had it in the right order.

Encourage sound effects as you read!

1. Jesus had gone back up to heaven. The disciples had witnessed amazing things during their time with him, but they had never seen anything like that. He told them that they wouldn’t be alone because the Holy Spirit would come to them and they would have power. It sounded good!

2. But it hadn’t happened yet…They were sitting in a room together, wondering what was coming next, when there was an enormous noise. It sounded like the strongest wind in the world. The whole house shook. The noise sounded like it was coming from heaven. Was this the power Jesus had told them about?

3. Suddenly, they all had flames of fire on top of their heads! It wasn’t burning them on the outside, but inside they felt God’s power running right through their bodies. What a feeling! They had never known such joy and such peace! The Holy Spirit had come, just as Jesus promised!

4. Then they started speaking in different languages! Crowding around them, some Jews who were from different countries could hear the disciples speaking their own languages. Amazed, they  asked each other: “Aren’t these men just simple fishermen from Galilee? How can they speak our languages? We’re from all over the world but they’re telling us all the great things God has done in our very  own languages! How can this be?”

5. Some of the Pharisees, who had been watching from further away, raised their eyebrows and tutted. “They’re drunk!” they exclaimed. “Making fools of themselves yet again.”

At this point, get the two groups to come up with their own version of what happened next. When they’ve finished,  encourage them to read these endings out.

Finally, tell the group what happened:

Peter suddenly felt very brave. He stood up and started speaking in a very loud voice, which rose above all the noise and chatter. Explaining to everyone what was happening, he invited them to follow Jesus and be baptised. That very day, 3,000 people became Christians and were baptised, and that was the beginning of the Church.

Continue chatting about the story, using these questions and others to stimulate discussion:

pieces of sponge. Chat about how a sponge works. To do its job, it must soak up water. In the same way, we need to be filled with the Holy Spirit.

What is important to the children about this story? Invite them to write this on the strips of sponge. Layer four pieces on top of the other four. Tie the string around the middle and spread the strips out into a star shape.

You will need: reflective music and the means to play it

Invite the children to hold out their hands and ask the power of the Holy Spirit to come into their lives, bringing his power to make the difference they need.