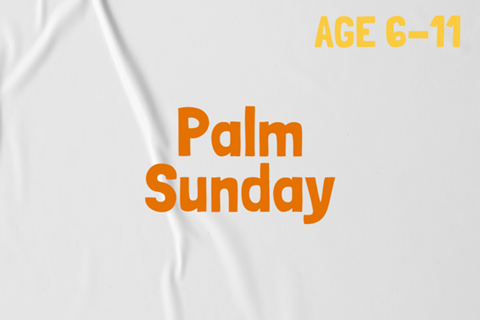 Background: This story is one of celebration tinged with sadness. The crowds welcomed Jesus into Jerusalem, but opposition to him was growing and Jesus knew that his death was imminent. Palm Sunday can help us introduce the whole Easter story to children, particularly those who have never heard it before.

You will need: red-carpet photos from the Oscars

You will need: green or white A4 paper; scissors; green or brown felt-tip pens or pencils; crepe paper; glue

Cut out leaves from green or white paper. Children can colour these and stick crepe paper on them. They can cut out and create their own leaf shapes and decorate. They will need these for the Bible story, response and prayer.

You will need: shawls or scarves; leaves from ‘Leaf-making’

Most of the children will form the crowd. One child should be Jesus. Children should put on a coat, shawl or scarf. Decide where to locate ‘Jerusalem’, and choose two children to go there before you start. Decide where the donkey in the next village will be found. Tell this story.

Jesus and his followers set off from the north of the country to travel to Jerusalem for Passover. At this festival, Jews celebrated the time when God rescued them from Egypt. Jesus knew he was going to die in Jerusalem. As they walked, Jesus tried to help his friends understand this, but they found it very difficult to grasp. Half the children walk around your meeting area in a tight group around ‘Jesus’.

The road was rough and dangerous. Lots of robbers hung around there. So Jesus and his friends travelled with lots of other pilgrims, all going to Jerusalem for the festival.

After several days, they saw the city of Jerusalem in the distance. Jesus stopped and everyone in the small crowd with him stopped too. Children stand still facing ‘Jerusalem’.

“Go into the next village,” Jesus told two of his friends, “and when you find a young donkey there, untie him and bring him back to me.”

“What if someone asks us what we’re doing?” they said.

“Say: ‘The Lord needs it’,” Jesus replied. Jesus sends two children to find an imaginary donkey, which they ‘untie’ and bring back as you read.

The two disciples did what Jesus told them. They went to the next village. They saw a young donkey. They untied it. When someone challenged them, they said… What did Jesus tell them to say? Pause for the answer.

They brought the donkey back to Jesus. All the remaining children join the others to make a larger crowd around Jesus.

Jesus got onto the donkey and headed off towards Jerusalem. Long ago, King Solomon had ridden a donkey into Jerusalem to be crowned as king. The crowd began to get very excited. Jesus was someone special. They knew one day the Messiah was going to come as king. Was Jesus the Messiah, the king who would save them from the Romans?

Jesus got closer and closer to the city gates. People rushed towards him to see what was going on. They snapped off branches from nearby trees and shouted: “Hooray for Jesus! Make way! Make way!” Say this three times, getting louder each time. Throw the leaves onto the road.

As Jesus came through the city gate, he met crowds - more people who had come for Passover. Some of these joined in. But some did not like Jesus, what he said or did. Some were planning to kill him! The two children already in Jerusalem wag their fingers at Jesus, then turn their backs.

Jesus knew his enemies wanted to kill him, but he went on into the city towards the temple.

Chat about the story using these questions, encouraging everyone to join in if they want to:

What was it was like for Jesus in this story?

Why did Jesus do what he did?

What would it have been like for the crowd, for the owner of the donkey and for the enemies of Jesus?

You will need: leaves from ‘Leaf-making’; toy donkey (or a picture); an arch made of boxes

Sit the children, holding their leaves, in two lines facing each other on either side of a ‘roadway’. Place the donkey in the middle, with your arch at one end.

Ask children to think, if they had been there, how close to Jesus they would have wanted to be. Setting out with Jesus at the start? Chosen to find the donkey? Joining Jesus as he approached Jerusalem? Just watching as he rode into the city? In Jerusalem, turning their backs on Jesus?

Encourage the children to place their leaves somewhere along the ‘roadway’. Invite comments on why they made this choice.

You will need: more paper leaves

Either use the same leaf or give the children another paper leaf. Explain that most people were very excited to see Jesus, but he was not going to be a king in the way they imagined. He was going to rescue them, but not in the way they expected.

Children can either write or draw on their leaf something they want to say to Jesus.