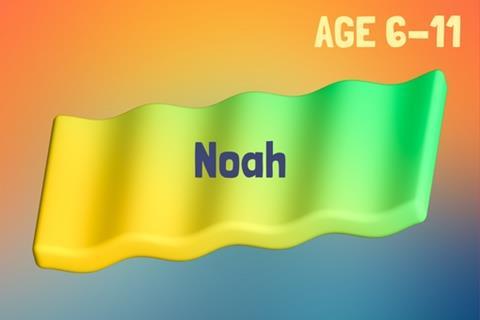 As children come in and sit down, share your refreshments around and ask them to share one thing from this week that was unfair and one way they have either felt loved or loved someone else.

You will need: large sheet of paper; felt-tip pens

On a large sheet of paper, draw a ‘masterpiece’, making a show of being really pleased with it. Another leader should then interrupt and scribble over it, leaving a small corner of the picture scribble-free. Ask the children how they would feel if it was their picture?

Tear off the small section that wasn’t scribbled on. Screw up the rest of the picture, but put the small, precious section somewhere safe. Ask the children what they would do with that section.

You will need: a watering can; junk to make a boat: sticky tape, large cardboard box, paper and pens; paddling pool; water; a leaf

Arrange the children into smaller groups. Using the materials, ask one group to make the boat, one to draw animals and birds (including a dove), one to draw Noah and his family, and one to make a mountain with the cardboard box. Tell this story:

The people God had made in his perfect world had turned bad. They killed, stole and hurt each other. God looked at his world and was sad. People had made his beautiful world evil, and so he decided to destroy everything. There was only one good man and his family - Noah. Noah was God’s friend. He spent time with God and listened to him. One day, God spoke with Noah: “I can’t look at all this ugly evil any more,” said God. “I am going to send a flood. All the evil will be washed away. But I want you and your family to be safe, so you’ll need a boat.”

“Don’t worry Noah, I’ve got a plan. You have to trust me!” God laughed lovingly as he explained. “I want you to find two of every creature and put them on the boat.”

“It’s going to have to be an enormous boat!”

Noah began to collect wood and build the boat. All the bad people around him laughed. “Ha ha! What on earth are you doing? You stupid old man!” they said. But Noah kept at it. It was tough. His three sons helped him too. It hurt their backs, the wood scratched them and their blisters hurt! Eventually the boat was finished. (Put the junk model boat into the paddling pool.) All the animals and birds went in. (Put the animals and birds into the boat.) Suddenly the inside of the boat became very noisy and smelly. Noah wondered how he was going to live with all the noise and stink. Animals were screeching, howling, trumpeting and pooing everywhere! (Encourage the children to make very loud animal noises!)

As Noah and his family climbed aboard the boat, God shut the door and it started to rain. (Put Noah and his family into the boat. Begin to fill the paddling pool with the water from the watering can.) All the people who had been watching and laughing at Noah suddenly looked very worried. “Was Noah right?!” they asked. Soon Noah and his sons couldn’t see the ground. The boat lurched from side to side as the water rose. The animals shouted in fear. (Make more loud animal noises.)

For 40 days, the rain fell. All Noah could see was water, water, water. It had risen so high that it covered the mountains. Finally, Noah saw that it had stopped raining. “It’s stopped!” he shouted. Everyone cheered loudly, it was so exciting! (Get everyone to do a great big cheer!) The boat was getting really whiffy by now, but the water was too high for them to get out of the boat. “How will I know when there is dry land?” Noah wondered. “Aha!” Noah had an idea…

He opened the window on the boat and sent a dove out. The dove flew round and round but came back to the boat because it couldn’t find anywhere to land. (Take the dove out of the boat and ask one of the children to run around the room with it and then return it to the boat.) Noah knew the ground was still too wet. A week later he did it again, and the dove came back with a leaf in its mouth. (Choose another volunteer to run around the room with the dove, and return it again with a leaf.) “Fantastic! The ground is nearly dry!” A week later he sent the dove out again, and this time it didn’t come back because it had found somewhere to land. (Choose another volunteer to run around with the dove and not return it. Then put the ‘mountain’ into the water and land the boat on the mountain.)

At last everyone could climb off the smelly boat! All the animals clambered, skipped, marched and flew off the boat and explored the dry land. Noah and his family had a party and worshipped God. They were so thankful that God had kept them safe on the boat. And as a promise that he would never flood the whole earth again, God put a rainbow in the sky.

Ask the children these questions, ensuring everyone is able to contribute:

You will need: paper plates; pens

Put children into pairs or smaller groups. Discuss how the following characters in the story would have felt: Noah, God, the people on the earth, Noah’s family. On paper plates, draw emojis to sum up each character’s feelings and then get feedback from the children.

You will need: different coloured paper (one for each colour of the rainbow); music

Scatter the coloured paper around the room. Play a dancing song then stop the music. The children should stand on a nearby piece of paper. Shout a colour and encourage the children on that colour to say a prayer, thanking God for his love, justice and faithfulness. If there is anything that has disturbed them about the story, encourage them to explore this with God too.