Light of the world 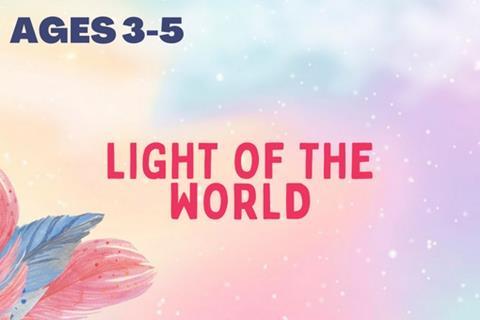 Background: In this session, we will look at a story of Jesus bringing sight to a blind man to explore the idea that Jesus is the light of the world. As with the bread of life, younger children will struggle to grasp the metaphor, but the physical act of bringing sight to a man who couldn’t see will help children start to process the idea. They will also meet a Jesus who wants to help them.

As the children arrive, sit them in a circle. Ask them about the darkest place they have been. Who likes the dark? Why? Why not? Some people who are blind can see light or shapes, but others cannot see anything. It is as though they’re in the dark all the time, although they will know that it’s not night-time because of the sounds, smells and movement around them. Jesus helped a man who was blind and he talked about darkness.

You will need: items that make sounds; blindfolds

Blindfold a few children, one at a time, and ask them to identify sounds, such as a bell, rustling paper, switching on a computer and pouring water. Even though someone is blind, they can under­stand what is going on by listening

Before the session, make two faces on a round paper plate or a large round card. One face has no iris or pupil; the other has wide open eyes. In a container, mix up a muddy paste from the flour, water and brown colouring. Use the props to tell this story:

Blind man Barney was begging at the side of the road. It was the only way he could make enough money to live. People sometimes gave him money and sometimes they fell over his feet. He couldn’t see anyone. Show the first face. Comment on the blank eyes.

One day, Barney heard some men talking about him. A man’s voice asked a question: “Is this man blind as punish­ment for doing something wrong or were his parents to blame?” Another man with a strong voice answered: “No one did anything wrong. But I tell you, God’s going to do something extraordin­ary. While I am in the world, I am the light of the world.”

Blind man Barney wondered what this man with the strong voice meant. He wondered if this was the voice of Jesus. He’d heard about Jesus, who was kind and who made sick people well.

Everything went quiet. Pause. Then Barney heard someone spit. Not once, but twice. Make a spitting sound. Don’t ask for volunteers!

Barney heard footsteps coming towards him. Everyone makes a footsteps sound. Pause.

He felt mud being spread over his eyes. Ask two children to put mud paste on the blank eyes.

Barney then heard the strong voice say: “Go and wash the mud off your eyes in the pool of Siloam.” He was sure that this was Jesus!

Barney did what he was told. He carefully made his way to the pool. He knelt down and splashed water on his eyes. The mud peeled off. He blinked. The light was so bright. He screwed up his eyes, but Barney could see! Show the second face. He wanted to thank Jesus, but he didn’t know what Jesus looked like and he couldn’t hear Jesus’ strong voice.

Some people thought that the man who could now see wasn’t really Barney. Others were unhappy that Jesus had made a blind man see. They told Barney to go away.

Jesus heard what had happened. He found out where Barney had gone and sat down beside him. Of course, Barney didn’t know what Jesus looked like. But once he knew it was Jesus, he was filled with happiness. He worshipped him because he knew Jesus had come from God. Jesus had brought light into him and taken away the darkness. Jesus was the light of the world.

Ask the children these ques­tions, making sure everyone has a chance to contribute:

You will need: tea-lights; hard vegetables, such as swede or turnip; sharp knife; wa­ter-based paint; brushes or tin foil

Unless you have several adult helpers, cut the hard vegetables into slices thicker than a tea light in advance, drying them with paper towel. Cut a hole inside, large enough for a tea light. Give each child a piece of tin foil to cover their holder. For a longer activity, invite children to paint their tea-light holder. As you work, continue to chat about the story and what the children think of it. You could use battery-operated tea lights for this activity.

You will need: tea-light holder from ‘Creative response’; a large candle; matches or lighter (or a battery-operated candle)

Put a lighted candle in the middle of the group. Watch it flicker brightly. Say: “We often light a candle as a sign that God is with us, even though we can’t see him.” Then light each child’s candle in their tea-light holder (as safely as possible!).

Imagine a light is shining inside us. What bad action or thought is shown up that we’d prefer remained hidden: for example, when we’ve been rude, lied or been selfish. Encourage the children to talk to God about this in their heads. Assure them that God has heard what’s been said and thought. He forgives us. Jesus, the light of the world, makes us all clean.

Imagine a light shining in us where there is darkness and fear. The light of Christ shines so that it is no longer dark. Encourage the children to talk with God about something that scares them or seems dark.