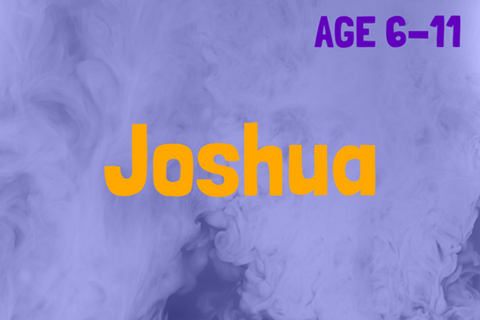 BACKGROUND: Joshua followed in the footsteps of seasoned leader Moses, and was given the daunting task of guiding the Israelites into the Promised Land. God’s words of reassurance just before Joshua took on this role didn’t focus on his gifts, skills or experience, though he no doubt had these. Instead, this passage shows us that, above all our abilities, the greatest thing we need to know when we face unknown or difficult situations is that God promises to be with us.

Gather the children together for a time to catch up, build relationships and reflect on the week just gone. Have people share exciting news such as birthdays, trips or events. You might like to use the following question to start the conversation as a light-hearted way into today’s theme: “What is the bravest thing you have ever done?”

You will need: relay batons (these could be made from rolls of newspaper held secure with sticky tape)

Hold a relay race with the children. Split the group into teams and line them up at one end of the room. Provide the first player in each team with a relay baton. On your shout, the first player must run to a marked spot at the other end of the room and back again before passing the baton to the next teammate. Once every team member has run, the team should sit on the floor. The first team to finish is the winner. If you have a small group you could do this as one team, doing the activity twice and timing each go, challenging them to beat their previous time on the second go.

You will need: lining paper; pens

Begin by recapping with the children how God had promised Abraham that one day his descendants would live in the Promised Land (Genesis 15) and how God had used Moses to lead the Israelites out of slavery in Egypt and toward this land (Exodus 13-14).

Explain to the group that Moses ‘passed on the baton’ of being the  Israelite  leader to Joshua just before he died. It’s a bit like  a relay race, where someone passes the baton on for someone else to run the next part of the race. Moses handed over to Joshua so he could run the final leg of a very long, historical journey. It was Joshua’s job to finish the race and lead the Israelites into the Promised Land.

Ask the children to shout out words that describe how Joshua might have felt when he found out about his task. Give small groups of children a sheet of lining paper each. Encourage them to draw around a person in their group, then draw or write things that they think make a good leader onto the person outline.

When the children have had time to reflect, encourage them to share  their ideas. Notice with them any trends in their thoughts. Are they predominantly skills, talents or experiences? Are they things that anyone can learn? Or qualities that some people have and others don’t?

Ask someone to pretend to be a leader like Joshua (this could be a child or a leader). Invite the children to share any words they might say to encourage them before a big job.

Explain that this is what God said to   Joshua to encourage him at the start of his daunting task. Wonder together about what else God could have said to encourage Joshua, and why he might have chosen to say what he did. Try to draw out the idea that God didn’t list all of Joshua’s gifts and skills, or the qualities he had  that  made him a good leader, like the ones we came up with earlier. Instead, God told Joshua that he should stay close to him and follow the instructions for living that he had given to Moses. He reminded him to be “brave, strong, bold and courageous” because God would be with him wherever he went.

Use the following questions as prompts for discussion. Encourage the children to think about what the passage might be saying to them and how it could be applied to their everyday lives. Try to encourage wondering, reminding them that there isn’t necessarily  a single right answer.

You will need: old maps or images of maps printed out; pens and scissors

Provide the children with the maps (or pictures of maps). Encourage them to draw around their foot on the map and cut it out. Ask them to copy Joshua 1:9 onto their outline or draw a picture that reminds them of today’s session. As you work, continue your chat about the story. Some children might be worried about situations they are facing, so seek to reassure them that God will be with them. They should take the cutout home as a reminder that, just as God promised to be with Joshua, he promises to be with us, whatever we face.

You will need: relay baton(s) from ‘Intro activity’

Encourage the children to think quietly or share openly about situations in which they would like God to give them courage. Sit or stand in a circle and pass the baton around the group. When each child has  the baton they should pray for the person next to them, either aloud or in their head.

In a larger group you may need to hand out multiple batons to speed this up.