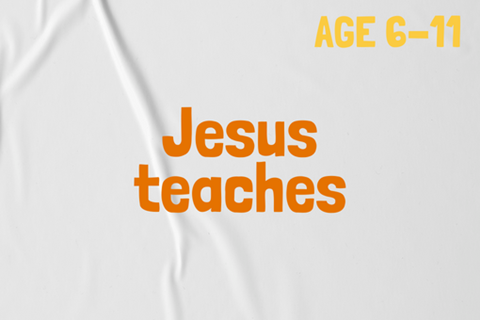 What special meals do children remember? A birthday meal, wedding banquet, Christmas dinner? What made it special? The food or the occasion? Why do they remember it?

You will need: objects for the game; cloth; tray; pens and paper

In pairs or threes, give the children one minute to memorise all ten objects. Cover up the tray and give the pairs two minutes to draw (not write) a picture of the objects. Which were the easiest to remember? Why?

You will need: tablecloth; loaf of flat bread; bowl of red grapes

Lay out the tablecloth on the floor and sit around it. Place the bread and grapes near to you on the cloth. Tell this story:

Jesus had been telling his disciples he was going to die. But how could they understand? He kept on teaching in the temple and his enemies were getting more and more angry, wanting to see him dead! But his enemies could not find a way to kill him.

On the Thursday of Passover, when Jews celebrated God rescuing his people from Egypt, Jesus wanted to eat the special Passover meal with his friends.

Ask the children if they know what Jesus would have eaten in this meal, which many Jews still eat at Passover. This includes: roast lamb (the blood of the lamb was painted over the doorposts of the Israelite homes), bitter herbs (because life in Egypt was hard), salt water (as tears because they were sad), flat bread (because they were in such a rush they had no time to let bread rise; unraised bread was less likely to go mouldy).

Jesus had known where to find the donkey he rode on into Jerusalem.

Ask who remembers this from the last session.

In the same way, he knew where they could eat this Passover meal.

Jesus said to Peter and John: “Go into the city. You’ll meet a man carrying a jar of water. Follow him into the house and say to the owner: ‘Our teacher wants to know where we can eat the Passover meal.’ The owner will take you upstairs and show you a room. Prepare the meal there.”

It happened just as Jesus said.

Ask the children if they can remember what Peter and John had to do.

Jesus and his friends gathered in this room at the top of the stairs. They ate the same food they had eaten every year at Passover. What do you think they drank? What colour was the wine? Jesus took a cup of wine. He thanked God for it. Then he handed it to his disciples and told them to drink it and share it with everyone else. No one was to drink it all. He told them this was his last meal with them.

Then Jesus did four things with a loaf of bread. It would have been a flat loaf.

Ask if anyone remember why it was a flat loaf? Repeat the four actions Jesus did.

First, he took the bread in his hands. Second, he thanked God for the bread. Third he broke it. Fourth, he gave it out to his disciples. He said: “This bread is my body which is given and broken for you. Eat this as a way of remembering me.” Everyone took a piece as they passed it round.

Ask the children to remind everyone of the four actions. Pass the bread around, reminding children to picture the scene of Jesus’ last supper.

Then Jesus picked up another cup of red wine.

Pick up the grapes.

Jesus said: “This is my blood, which is poured out for you.” He passed the cup around and everyone drank from the cup.

Pass around the bowl of red grapes, specifying how many grapes each child can take. Suggest everyone holds their grapes until the whole group has taken theirs, so you can eat your grapes together.

Chat about the story using these questions, encouraging everyone to join in if they want to:

You will need: a church leader to talk about Communion

Brief your volunteer to chat with the children about how your church celebrates Communion and answer some of their questions. Why does your church do it the way it does?

People do many things to remind themselves of something they fear they will forget. Ask for suggestions, such as setting a reminder on a mobile or making a list.

Give children a piece of card to cut into any shape they like. They should write or draw something they’ve discovered about or heard from Jesus today, which they don’t want to forget. Punch a hole in the card, flatten the elastic band and thread one end through the loop made by the other end. Gently pull tight. They can hang the card somewhere at home so they won’t forget.

Ask God to help everyone remember what Jesus has meant to them today.