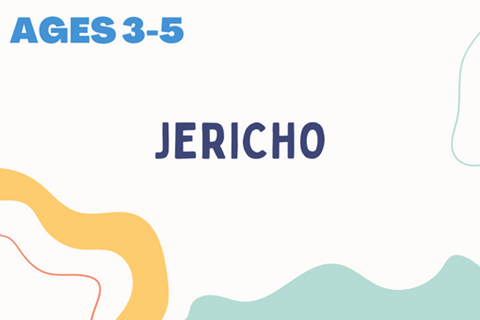 BACKGROUND: The Israelites have spent 40 years in the desert. They’ve spied out the land, crossed the River Jordan and are ready to go in. Jericho is surrounded by a huge wall, so the task of conquering the city would have seemed impossible. Joshua followed God’s instructions and gave God all the glory when the impossible happened. It wasn’t down to his talents or a plan he came up with. The Israelite people fully trusted in God, and he went with them into ‘battle’.

Invite the children to sit together in a circle and encourage them to share stories from their week. Celebrate any birthdays or special events. It can be helpful to have an object or cuddly toy to pass around for the children to hold as they speak. Ask them: “Who’s the bravest person you know?” Thank God that he’s with you and ask him to help you learn more about him today.

You will need: a selection of building blocks, such as Lego or Duplo (or bigger blocks such as cardboard boxes)

Use the blocks to build a big wall. You  could do this all together if you have a  small group or let the children play with the blocks individually or in smaller groups if you have plenty to go around.

You will need: building blocks or shoeboxes; a box; musical instruments

Build a wall together and sit around it as you begin to tell this story:

Joshua and the people of God had almost reached the Promised Land. They had sent in their spies, who met Rahab, and then they had crossed the River Jordan. They were camped near the city of Jericho.

Jericho was surrounded by big walls, and it had heavy gates. The city was shut off because the people inside it were scared of the people of God.

The people of God wondered how they would be able to get in, but God had promised them the land and he knew what to do.

God told Joshua his plan. It was a strange plan, and maybe Joshua was surprised by it. But he trusted God and he listened.

Joshua gathered the soldiers together. They had their weapons ready but the plan wasn’t to fight. Invite some of the children to stand up and be the soldiers. Ask some to be the priests and to carry a box that represents the Ark of the Covenant.

Priests carried the Ark of the Covenant (a wooden chest covered in gold, where they kept the Ten Commandments), and seven priests walked in front of it blowing a ram’s horn (which was a bit like a trumpet). Give these children a musical instrument to play. The army marched around the city once with the priests but they didn’t make any noise.

They all made as much noise as they possibly could, and the big, strong walls fell down! Ask the children to play their instruments, shout and knock your wall down.

The Israelites took over the city of Jericho as God had told them to do. They looked after Rahab and her family just as they had promised.

Joshua was strong and courageous because he knew that God was with him. The plan had probably sounded a bit ridiculous, so when the walls fell down everyone knew that it was God who had made the impossible happen. It was because Joshua trusted God and followed him.

It the children are keen, then tell the story again, enjoying marching around and playing the instruments

Ask the children these questions, encouraging everyone to take turns to contribute (use your object or cuddly toy if you passed one around earlier):

You will need: building blocks you can write or draw on (or brick-shaped paper and Blu tack); felt-tip pens

Invite the children to write or draw the things on the bricks  (or  on paper bricks) that stop them feeling close to God, or the places where they feel afraid. Build a wall and then remind them that they can be strong and courageous because God is with them as you knock it down. There is no wall between us and God; he is with us. Knock   or tear your wall down to represent this.

Invite the children to settle in a comfortable space away from the others and spend some time ‘catching’ from him. Allow time and space for them to connect with him.

For more about ‘catching’ from God, visit parentingforfaith.org/chat-and-catch.

For the rest of this month’s sessions go to youthandchildrens.work/together