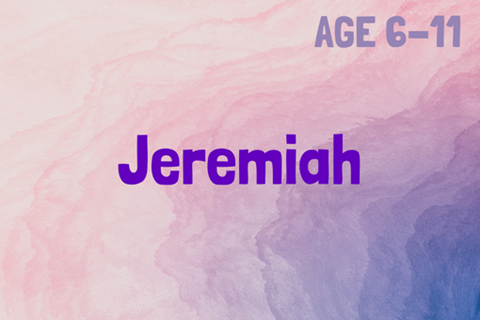 BACKGROUND: Like Elijah earlier in this series, Jeremiah is wrestling with his calling from God in this passage. Unlike Elijah, Jeremiah does not have the privilege of encountering God in the gentle breeze. Rather, he articulates here the internal wrestling occurring as he cries out in anger and frustration but also acknowledges the awesome authority of God.

As you begin the session, gather the children together in a circle. Invite them to share refreshments together and talk about their recent news or experiences. Ask the group what they might want to be when they are older. Do they ever think about what God may have planned for them?

Invite the children to pair up with someone who is roughly the same size and explain that you are going to conduct  a  ‘thumb war’. Using their right hand, they should grip one another’s fingers and say the rhyme: “One, two, three, four, I declare a thumb  war!” At the same time, they should move their thumbs from side to side. Once the rhyme is complete, each player  should  try to use their thumb to pin down the thumb   of the other person for a count of three.

You can repeat for extra rounds if you  so wish, or hold a  knock-out  competition to find an overall winner. Explain that  during this session we will be exploring the story of someone who was wrestling with himself and with God.

You will need: printouts of Jeremiah 20:7- 18 from an easy-to-read translation, such as the Good News Bible or the Contemporary English Version; felt-tip pens

Explain that we are going to hear a story about Jeremiah, who was a messenger from God. God had chosen Jeremiah before he was even born to be his prophet and share his messages with the people. Jeremiah often struggled with this, pointing out his weaknesses to God and facing  many problems along the way.

Then tell this story:

One day, Jeremiah warned the  people that God was very unhappy with the way they were living. He said that punishment was coming. But rather than changing their ways a priest arrested Jeremiah and had him put in the stocks, where he was punished and humiliated. After he was released, Jeremiah cried out to God.

Give out copies of the Bible passage and pens. Ask someone to read Jeremiah 20:7-18 and invite everyone else to follow along. As they read Jeremiah’s prayer, ask the children to draw emojis all over the passage, plotting Jeremiah’s feelings. You may need to read the passage more than once and allow time afterwards for the

children to finish marking up their copies of the passage.

Once everyone has finished, invite the children to share how they think Elijah would have been feeling at the various points of his complaint.

Divide the children into two equal-sized groups and line them up in separate lines facing one another with a gap in-between. Ask for a volunteer or choose a leader to play the part of Jeremiah, and ask this person to stand at one end of the two lines.

Explain to the group that you are going   to act out an activity called ‘Conscience Alley’. The two lines of children represent

On the signal to begin, Jeremiah steps forward, standing between the first two players. The player to his left should tell him something negative, reminding  him of a challenge he is facing and why he is feeling so down. The player to  his  right will then remind him of something positive about who God is and what that would mean to Jeremiah.

As Jeremiah continues to walk through the two lines, those on either side take turns to chip in with a comment they want to make to him, according to which side they are on. When he reaches the end, you could ask him to feed back any conclusion he may have come to, depending on who you have chosen to walk through.

As a follow-up to this, remind the group that no matter how low we are feeling about ourselves and the things we are not able to do, God is still God and his goodness remains. It’s OK for us to vent our frustrations at God, but that doesn’t change who he is.

Depending on your group, you could repeat this activity with a twist. Ask for a volunteer who is prepared to walk through the alley. As they walk along, they should call out something negative they  are feeling, but this time someone  from  the two lines calls out a truth about God for  that person to hold on to. Repeat with other volunteers as appropriate.

Even when we are struggling, you are there for us.

Even when we are questioning what is true, you are there for us.

Even when we can’t hear or see you, you are there for us.