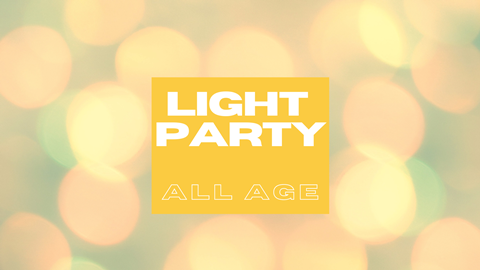 You will need: plenty of glow sticks (at least three per player)

Give each player three glow sticks and encourage them to attach the sticks to themselves in some way. This could be around their wrists, threaded through their belts or tied into their shoelaces. Choose two or more people to be ‘on’ (depending on the size of your group). The players who are on should try to tag the others. When they do, they should claim one glow stick from the person they have captured.

When a player surrenders their last glow stick they are out until the next game. The winners are the last person who is not ‘on’ to still have glow sticks, and the person who has captured the most sticks.

You will need: reflective strips (available online or from shops such as Halfords) or an old reflective jacket; scissors; glue sticks; small pieces of card; torches

Before the session, source some reflective strips or cut up pieces of reflective jacket and stick them to small pieces of card. Hide these around your playing space.

Give each player (or small group of players, depending on how many children or young people you have) a torch. Turn all the lights out. Each player (or small group) has to search the playing space and collect as many reflective cards as they can. The torches should help them find them, as the cards should reflect the torchlight back. The player or team with the most cards at the end is the winner.

You will need: glow-in-the-dark paint; paintbrushes; large sheets of paper, cardboard or plywood; music and the means to play it; different lights

An activity for older children or young people. Show the group the sheets of paper / cardboard / wood you have brought and encour- age them to paint decorations, pictures or graffiti all over them with the glow-in-the-dark paint. Once they have finished, hang the sheets up around your room and set up any lights you have brought.

Ask the group to work on a playlist together for dancing. (If you have a large group, the DJ team could be working at the same time as those doing the decorations and lights.) Once everyone is ready, turn off the main lights and enjoying dancing to your playlist!

You will need: a torch

Dim the lights as much as you can (while still making sure everyone is safe and doesn’t trip over). One player is ‘on’ and has the torch. They should shout out a countdown while the others hide. The player with the torch starts to search the playing area to find someone. Once they have done so they pass the torch to that player and go off to hide themselves. This new person is now ‘on’ and goes to find another player.

Play continues until you have reached a time limit. Congratulate anyone who remained unfound during the game.

You will need: sheets of newspaper, chalk or masking tape; torches; music and the means to play it

Before the session, mark out areas on your playing space with the newspaper, chalk or masking tape. Make them large enough for three or four children or young people to stand in. Make sure you have enough marked-out spaces for the whole group to fit in. Give a leader a torch and ask them to train their beam on one of the marked-out spaces (have one leader and torch per space).

Play the music and encourage your group to walk or dance around. When the music stops, the players should choose an   area to stand in. If the area they choose is full they have to go to another. On the count of three, one or more of the leaders should turn their torches on. If the young people are standing in an area

that is not lit by a torch they are out. (They could be out for just one round or for the whole of one game, in which case play until you have just one player left.)

You will need: blindfold

A classic game, ideal for all ages. Blindfold one player (make sure they are happy to be blindfolded, as some children don’t like it) and place them in the middle of the room. The blindfolded player has to catch the others while they try to avoid being captured. They can try to tease the catcher but will run the risk of being caught more easily!

If the players are keen, play again with a different person blindfolded.