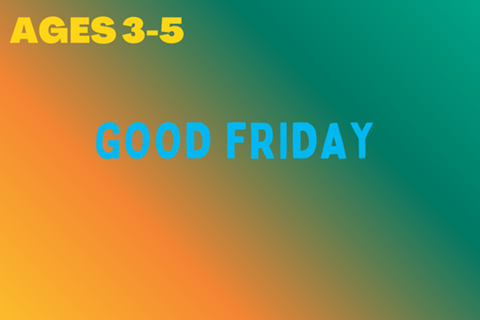 Background: In this session we will be exploring a simpler version of the story of Jesus’ arrest and death as Luke told it, using colours and shapes to help children remember and retell the story. Jesus’ pain and suffering should not be majored on, but it shouldn’t be avoided either. The next session will also use coloured shapes to retell the story.

Welcome the children by name and share any refreshments you have. Chat together about their favourite colours. Why do they like them? Which colours do they think of at springtime? Explain that for this session and the next one you’ll be exploring the colours of Easter.

You will need: a set of six small cards for each child in the following shapes (either white for the children to colour or coloured as instructed): a square (dark blue), a rectangular ‘sleeve’ (purple), a cross (brown), a skull-shaped hill (green), a circle of sun (half yellow, half black) a circular stone (grey); crayons or felt-tip pens

Give each child a pack of cards to colour in the appropriate colour. Make sure their name is written on each card. If the shapes are already cut out from the coloured card, hide them around the room so that each child can look for a set.

You will need: set of coloured and shaped cards for each child from ‘Intro activity’ (and one set for you. This could be a large set so the children can see what you are doing)

It was night-time and very quiet, but it wasn’t totally dark because there was a full moon. There was always a full moon at the time of the Passover festival. The sky was probably as blue as this square. Hold up the dark blue square.

They heard voices coming closer and closer, getting louder and louder. It was a crowd of soldiers and people who didn’t like the things Jesus had been telling them about God. They grabbed hold of him and took him as their prisoner to be judged by the religious leaders and the Roman governor. All of Jesus’ friends ran away scared, except Peter.

Peter followed the crowd to see where Jesus was being taken. Later that night he said three times, very loudly, that he didn’t even know Jesus! How sad. Everyone looks very sad.

The religious leaders and the Roman governor decided that Jesus deserved to die even though he had done nothing wrong. It wasn’t fair. While Jesus was a prisoner, the Roman soldiers in charge of him laughed at him. They got hold of a purple coat and put it on Jesus. Hold up the rectangular purple ‘sleeve’. Purple was the colour a king wore. This rectangle is the shape and colour of a purple sleeve. They pointed at Jesus and cried out: “Call yourself a king!”

Jesus didn’t say anything. Jesus was to die on a cross, that is two pieces of wood stuck together in this cross shape. Hold up the brown cross. His hands and feet would be nailed to the wood. He was taken to a hill outside the city of Jerusalem called ‘the place of the skull’, probably because it was a hill shaped like a skull or a head. Hold up the head-shaped hill. He was in so much pain. His family and friends stood and watched him on the cross. They couldn’t do anything to help him. Everyone looks sad.

For three hours the sky turned dark. The sun stopped shining, not because of the clouds or a storm. It may have been an eclipse of the sun. Hold up the yellow and black sun shape. Everyone watching held their breath and wondered what was happening. Suddenly, Jesus shouted: “Father, I put my trust in you!” Then he stopped breathing. He had died. His family and friends were heartbroken. Everyone looks sad.

One of Jesus’ friends was a religious leader. He hadn’t wanted Jesus to be put to death, but he had been unable to do anything about it. He took Jesus’ body down from the cross, wrapped it in fine cloth and laid it in a cave. This was a place where dead bodies could be laid. A large stone (it was a round shape because it was so heavy it needed to be rolled along) was rolled across the entrance to stop anyone from getting in and anything from getting out. Hold up the grey circle. Everyone went home feeling so sad, so scared and so disappointed. Everyone looks sad, then scared, then disappointed. Jesus, whom they loved so much, was dead!

You will need: cards from ‘Intro activity’; the means of attaching all six cards to each other in the right order, eg a cross-shaped piece of card, some wool or sticky tape

Stick the shapes together in some way, for example sticking them to a card cross, with one at the top, three on the crosspiece and two below. Alternatively, you could attach them to a piece of wool or stick them together to make one long strip with sticky tape.

Explain that Good Friday is a sad day because we remember that Jesus died. But it is called ‘good’ because it’s also a day of happiness. Jesus died so that it would be possible for anyone to know just how much God loves us. That is very good news. That’s what makes Good Friday a good day. As you work, chat through any questions the children have.

As a prayer following on from the discussion you’ve had, sing the song ‘When I think about the cross’ (Mark and Helen Johnson, Out of the Ark Publishing) or any song about the cross that your children may know. Given that you have spent time thinking about being sad, you could pray for anyone you know who is sad.