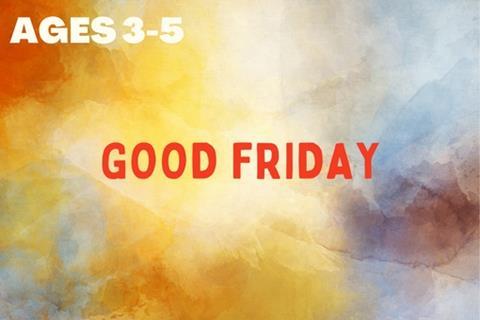 Background: The Good Friday story is a hard one, and we need to find a way to tell it age-appropriately without losing the truth. You will need to watch the reactions of your group in case anyone is finding it upsetting.

Welcome the children by name and invite them to join you sitting in a circle. Share out your refreshments and chat about what the children have been doing that week. Ask them about a time they arrived some­where and felt welcomed. Have a story ready about the last time you arrived somewhere special in case the children struggle to think of something.

Before the session, cut some crosses out of thick card. Give each child a cross and encourage them to decorate it with felt-tip pens and stickers. As they work, chat about what they already know about the cross. Do they know why it’s a symbol for Christians? Knowing this should help you work out how to pitch the story.

You will need: a large blanket; artificial flowers; a book; the decorated crosses from ‘Intro activity’; three cushions (one of which is round)

Explain to the children that you’re going to make an Easter garden as you tell the story. First, spread the blanket on the floor and gather the children around it. In one corner, ask them to help you place the flowers. Then go on to tell this story:

This is the Garden of Gethsemane. Jesus came here with his friends to pray. He knew that God’s big plan was about to get difficult. Judas, one of his friends, had run off earlier. He had gone to tell Jesus’ enemies where he was.

Judas came into the garden, bringing soldiers to find and arrest Jesus. Simon Peter took out his sword to defend Jesus, but Jesus said: “No! I have to go and carry out God’s plan.” The soldiers took Jesus to the high priests.

Place the book in the opposite corner of the blanket to symbolise law and author­ity.

The high priests asked Jesus lots of questions. They wanted to know what he had been saying. He answered them simply: “Ask the people who came to listen to me. They will tell you what I said.”

The high priests took Jesus to the house of Pilate. Pilate was a Roman, and he was in charge of the whole country. The high priests hoped Pilate would deal with Jesus. Pilate said he couldn’t find anything that Jesus had done wrong. But when he offered to release Jesus, they shouted: “Kill him!”

Invite the children to put their crosses in the third corner of the blanket.

So, it was decided Jesus was going to die, and that he was going to die on a cross. The soldiers laughed at Jesus. They were cruel to him and took his clothes. Mary, his mother, and Mary, his friend, stayed close by as Jesus died.

After Jesus had died, his friends took his body away and cared for it. They buried him in a tomb in a different garden.

Roll the ‘stone’ over the tomb and place some of the Gethsemane flowers around it.

Ask the children these questions, making sure everyone has a chance to contribute:

You will need: art materials (such as crayons, paint and paintbrushes, felt-tip pens); paper; clean-up and cover-up equip­ment

Doing this sort of ‘free craft’ gives space for children to process their thoughts. Their focus isn’t on completing a set craft; rather, they can think about what God might be saying to them through the story. It also gives children who might be upset by it some processing time so they can start to come to terms with what has upset them.

As you work, chat about the story. Let the children lead the conversation rather than telling them your own interpretation (unless they specifically ask you).

You will need: pictures from ‘Creative response’

Place all your pictures in the middle of the room, and sit or stand around them. Encourage the children to look at all the pictures and think about what they have discovered today. Then say this prayer:

Thank you, Jesus, for loving us so much that you died for us. Thank you that this isn’t the end of the story, and that the best part is still to come. Amen.

Send the children home with a cheerful little reminder that God keeps his prom­ises, and that the story will have a happy ending. A rainbow sticker or a colourful sweet could work.