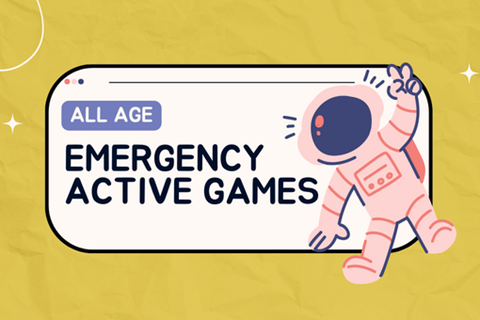 You will need: a sponge football; chalk or masking tape

Use chalk or masking tape to divide the playing space in half. At the far end of each half, mark off a strip of about a metre or so. Divide the group in half and station each team in one half of the room.

When they have the ball, the players have to throw it at the other team. If they hit an opposition player between the shoulder and knees, that player has to move to the strip at the opposite end of the playing area.

Play continues until all the players in one team have been sent to the strip at the other end of the space. However, players in that strip can be released if they get the ball and hit an opponent between the shoulder and knees. If this happens, they can return to their side of the playing space.

Play until one team wins or the group has burnt off their excess energy!

You know how to play: one person is ‘on’. They must tag someone on the shoulder or arm, and then that person is on. So it goes on until they have all burnt off that unwanted energy. You could also try one of these variations:

Stuck in the mud: choose two or three people to be ‘on’ (depending on the size of your group). When tagged, the player has to stand with their legs apart until another player crawls between their legs and frees them. Alternatively, tagged players can be freed by another player running under their arm.

Chain tag: choose two or three people to be ‘on’. When tagged, the player has to join hands with the person who tagged them. They must then go around holding hands and trying to tag more people. The game continues until everyone is holding hands in a chain.

Three lives: choose two or three people to be ‘on’. Give the other players three strands of wool. When tagged, each player has to give up one piece of wool to the person who tagged them. The winner is the player with any wool strands left. You could also give a prize to the tagger who collected the most strands of wool. As a variation on this game, you could put players into teams and give each team a different coloured wool.

You will need: chairs (one for each player, minus one)

Alternatively, you could use names that link to the theme of your session instead of fruit.

You will need: music and the means to play it

Play the music and encourage the players to dance around. Stop the music and shout out a number, for example: “Three!” The players have to get into groups of three. Anyone who is not in a group of three gets a point. Start the music again and keep playing, shouting out different numbers until they have burnt off some energy. At the end of the game, the player with the lowest points total is the winner.

There is no running around in this game, but it requires concentration so it will help to refocus minds. The group has to collectively count up to 20 (or a higher number if the children are good at this) with different members of the group shouting out the next number in the sequence. (There’s no order to who shouts which number. Any player can shout the next number in the sequence.) If two people shout the same number at the same time the whole group goes back to zero and starts again.