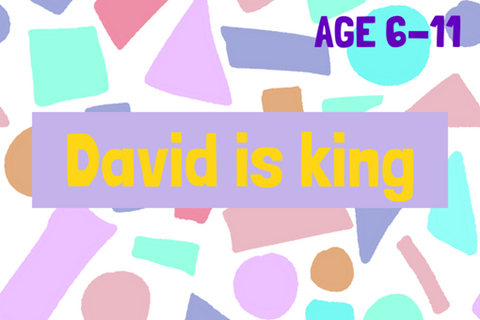 As the children arrive, sit everyone down in a circle. Ask the children to have fun thinking about what they would do if they were king or queen for a day! Make sure everyone who wants to has a chance to speak.

You will need: copies of 2 Samuel 7 from The Message, printed out in a large font for each member of the group; felt-tip pens

Fill the group on the story since the previous session. After David defeated Goliath, God chose him to be the next king of Israel. King Saul didn’t like this, and for some time tried to kill David! After a

difficult time between David and Saul, David became king. At the part of the Bible you’re reading today, everything is going smoothly for David. He and his army have won some battles, and the Ark of the Covenant (a holy box that was a symbol that God was with his people) has been brought back to David’s city, Jerusalem.

In 2 Samuel 7, we read about God talking to David and David talking to God about how God wants things to be in the kingdom of the Israelites. Give out copies of the passage to each child, explaining that The Message version of the Bible is a copy using words that makes it easier for us to understand using ‘everyday’ language.

Ask for volunteers to read it out and split the passage into chunks to give them all a turn at reading together. Be patient and encourage the group to listen carefully to each other. Once you have finished, recap what the story is all about, so that the children are happy with the events they have just read.

Ask the children to go through the passage again. Tell them to draw smiley faces next to those things that make them happy. They should draw wiggly lines under anything that confuses them and question marks next to anything they have a question about. Get leaders to help those children who find reading difficult. Once you have finished, compare smiley faces, wiggly lines and question marks and get feedback on why children marked up the passage as they did.

You will need: any materials to make a tent: sheets and blankets; string; poles; pop-up tents etc

Work together to make a tent! You may have an outside space with trees, in which case you could make one by tying up string between trees and hanging sheets inside. If you’ve got to stay inside, try blankets and sheets propped up with chairs. You could