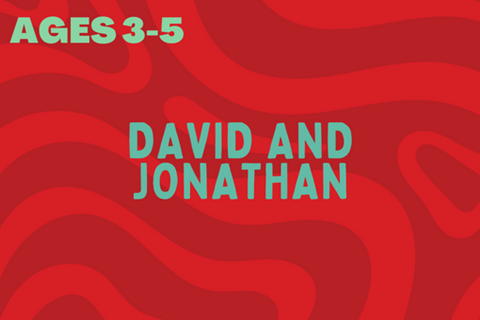 Background: David had become great friends with King Saul’s son, Jonathan. But there was a growing problem. King Saul saw David as a threat and hated him. Jonathan could hardly believe it. David wanted to escape from Saul’s royal court to save his own life, so he and Jonathan came up with a plan to work out just how angry Saul was with David. This plan would also test their friendship.

You will need: large sheet of paper; marker pen

Discuss what makes a good friend. Write or draw the children’s suggestions onto your large sheet of paper. Be sensitive to the fact that some children find it easier to make friends than others.

You will need: play people or rough drawings of King Saul (with a crown on his head), David, Jonathan and a servant boy; three arrow-shaped Post-it notes; a rock; a plain cloth.

Spread the cloth out on the floor with the children sitting in a circle around it. As you tell the following story place the figures on it, moving them around as appropriate.

Here is King Saul. He’s been king of God’s people for years. But he has stopped ruling God’s people properly. Place him on the cloth.

Here is Prince Jonathan. He is the son of King Saul. Place him on the cloth.

Here is David. He has been chosen by God to become king after Saul. King Saul doesn’t like David and wants to get rid of him. So David is scared. Place him on the cloth.

There was a big party and a big feast at King Saul’s palace. Prince Jonathan sat opposite his dad. There was an empty chair for David. Seat Jonathan opposite King Saul. If using play figures, seat them on chairs with an empty one for David.

King Saul wondered where David was but didn’t say anything.

The next day, King Saul had another great feast. Prince Jonathan sat opposite his dad. Again, there was an empty chair for David.

This time, King Saul spoke to Prince Jonathan. “Where is your friend? He should be here.”

Prince Jonathan said: “He’s had to go home to see his family.”

King Saul stood up and became very angry with Prince Jonathan. “How dare you tell me this? David is a bad man. I want to get rid of him!” He was so angry that he threw a spear at Prince Jonathan.

Prince Jonathan knew then that his dad really hated David. He ran out into the fields where he knew David was hiding. He took a young boy with him, as well as his bow and three arrows. Place David behind the rock, and stand Jonathan next to his servant.

As the boy got close to the rock, Prince Jonathan shouted out: “Go beyond the rock. I have shot the arrows a long way away. Run fast to get them.”

This was a sign to David that he should run a long way away. The boy ran beyond the rock as Jonathan had said.

At last the boy found the arrows and brought them to Prince Jonathan. The servant boy went back to the king, but Prince Jonathan stayed to find his best friend, David. They hugged each other and cried because they were so, so sad. They promised to remain friends and help each other. They asked God to keep them safe. Then David ran away.

Use the following questions to explore the story:

Make paper aeroplanes. As you do so, make the connection with the three arrows Jonathan shot and continue your discussion about the story. Make sure they make their planes distinctive either by using different coloured paper or by decorating them. The children can have fun testing how good at flying their planes are.

You will need: planes from ‘Creative response’

Line the children up, with each child holding their ‘arrow’. (You may need some spares for children whose arrows don’t fly.) Explain that when we say a short prayer to God, it is as though we are sending an arrow to him, knowing that he hears us. It’s called an arrow prayer.

David and Prince Jonathan were good friends. Each child repeats the following: “Thank you, God, for…” and then the name of one of their friends. Then they throw their arrows into the air and bring them back to the line.

David and Jonathan were sad to say goodbye to one another. Ask if any of the children know someone who is sad. Each child repeats the following: “Please, God, be with any boys or girls who are sad today!” Then they shoot their arrows again, as above.

David and Jonathan asked God to keep them safe. Each child repeats the following: “Please, God, keep me safe from all danger this week. Amen.” Then they shoot their arrows again, as above.