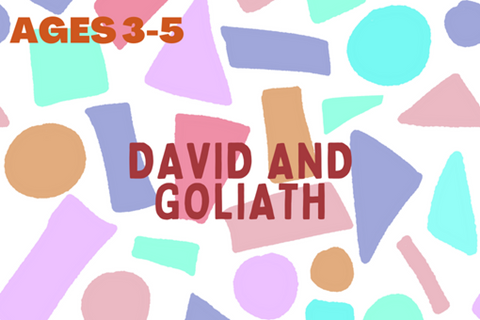 Background: Children are afraid of all sorts of things, rational and irrational, acknowledged and secret. This session needs to be led with great sensitivity. There is nothing wrong with being afraid. Allow children to share their fears without putting them under any pressure. Learning to trust an all-powerful God is an important thing for children to grasp in our scary world.

As you begin the session, invite the children to sit together in a circle and welcome parents to join you for this time, if appropriate. Encourage the children to share their stories and news from the previous week, taking turns around the circle. Give thanks to God for the happy times and prayer for any concerns the children have raised.

Ask the children to draw something that makes them scared. Hold up the pictures to see if other children can guess what it is. Help any children who struggle to articulate what they’re scared of.

You will need: a crown; a ‘throne’; a small cardboard shield; a small plastic knife; two or three boxes to act as gifts; a large elastic band; the two tallest and the shortest children – as long as they are willing to act out the story

If possible, tell this story outside with space to create a battlefield atmosphere and somewhere to run. Introduce the main characters: the second tallest child is King Saul. Refer to the last session about King Saul’s ‘appointment’, if you used it. The tallest child is young David, small and not

yet grown up. The shortest child is Goliath, the giant. Children may be puzzled by this. If not, point out the lack of logic! The rest are soldiers, either Philistines or God’s people.

Split the group in two, facing each other, with Saul and David at one end, Saul sitting on his throne, a crown on his head. Small Goliath stands at the other end, shield and plastic knife in his hand. Tell this story.

King Saul was a good king. (God’s people cheer, Saul looks proud.) At least, he started off well. Everyone was so glad to have a king, to be just like other countries. He was tall, handsome and good at fighting. But then things began to go wrong. He became proud. He didn’t listen to his advisors and friends. He stopped listening to God and to Samuel, the man of God.

David was a young boy. He had lots of big brothers and sisters. His brothers were fighting with God’s people. (Randomly choose a few children from God’s people to be David’s brothers.) But David had to stay at home to look after his dad’s sheep. Sometimes he protected his sheep from a lion or a bear. He had a sling, like an elastic band. He fired a stone with his sling which struck a lion or bear – and killed it!

His dad was worried about his sons, so one day he sent David to take some food and drink to his brothers on the battlefield. (David gives gifts to his brothers) David was surprised to see two armies lined up facing each other. He was even more surprised to see how scared God’s people were. Surely, God would help his people. (David walks between the two lines, flexing his elastic band.)

“I’ll fight Goliath, the giant!” David said. All the soldiers laughed. (Everyone laugh) All anyone could see was a short young man.

King Saul thought David was too small to fight. He gave David a sword and a shield. But David refused. He said: “I have fought a lion and a bear. God has kept me safe. He will keep me safe now. I’m going to fight in the name of the Lord God All-Powerful.” Everyone looked at David and saw only a short young man. But with God on his side, he was the most powerful, the tallest and strongest person on the battlefield. Goliath was the smallest and the weakest.

(David and Goliath face each other, either end of the two lines. Tell the two armies to start shouting for David or Goliath.)

Slowly David and Goliath walked towards each other – tall David and short Goliath. “I come in the name of the Lord God All-Powerful!” shouted David. He put a small stone into his elastic band and with a flick, fired it towards Goliath. It hit Goliath on the forehead. He dropped down, dead! (Children act this out.)

The soldiers of God’s people cheered and cheered. The Philistine soldiers got up and ran away.

You will need: a giant shield saying ‘The Lord God All- Powerful’; felt-tip pens; glue sticks

Say: I wonder is it a bad thing to be afraid of something? Who can you tell when you are afraid? How can telling God about our fears make a difference?

Children should draw themselves on this giant shield. They may stick on or repeat their picture from the first activity. Say: Jesus was afraid when he knew he was going to die. Can any one remember Jesus in the Garden of Gethsemane? Jesus understands when we’re afraid.

Ask them to screw up their eyes tightly and shiver as though they are scared. Ask each child to think of one thing that scares them. Then ask them to picture David coming to fight the giant, Goliath. The Lord God All- Powerful was on his side.

Ask children to open their eyes and shout out as loud as they can: “The Lord God All- Powerful is on our side!” Start quietly and say it louder and louder several times. You could sing a song about God being with us to give us courage such as the old song, ‘Be bold, be strong’.