By Claire Benton-Evans is the author of the All-sorts Worship series, All-sorts Prayer and the new Beastly Bible Stories series. She is the youth and children’s officer for the Diocese of Edinburgh. 2019-02-15T00:00:00+00:00 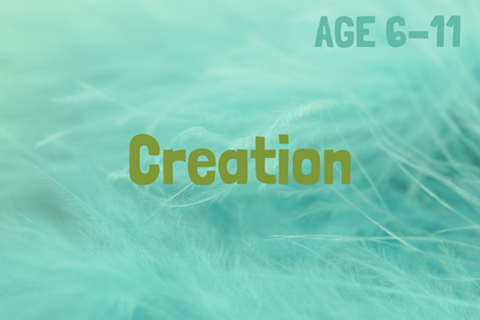 Background: The creation story is one of the oldest parts of the Bible, and people probably shared it aloud with each other long before it was written down. Like so many ancient stories, it is simple and profound. It has been told down the years to help people of faith understand their Creator God and how they and their world came to be. Don’t get bogged down by a ‘creationism versus science’ debate in this session. The aim here is to open up space for children to explore and ask questions about the Bible story as it is written. Encourage them to share knowledge they have about the world they live in, and to wonder about this ancient story with each other and with God.

As the children arrive, invite them to chat about what they enjoy making. Share your own creative passion and find out about each other’s, whether it be music, baking, drawing, Lego building or something really unusual. Talk about what is involved in the human act of creation, such as daydreaming about big ideas, planning, making mistakes and working hard.

This is a game to stretch the children’s brains to look as far back in time as possible.

Ask the children about the oldest thing they have seen or heard about. It must be something they have personal experience of. Have they visited a Victorian building, seen a Viking sword in a museum or been to a Roman ruin? How far back can they go?

Use the length of the room as an imaginary timeline from the beginning of time until now. Asking each in turn for their contribution, place the children along the timeline. Debate the relative positions together. For example, did the Vikings or Victorians came first? Or, more challenging, is a fossil older than a mountain? Agree on the timeline order for all the children’s suggestions, then invite second attempts to think of something even older, allowing them to move further down the timeline. This time, children may not have personal experience of something, but just knowing about it (for example an amoeba) is enough. As a group, how far back can you go?

You will need: the seven Bible readings (see below) in an accessible translation of your choice, printed in large print on separate pieces of paper; large, coloured pieces of cloth (black, white, green and blue), such as scarves, sheets or tablecloths (optional)

Explain to the children that the Bible begins further back than our timeline. In fact, it reaches right back before the beginning of time itself. It begins with the story of how everything was made. Today you are going to tell this creation story using only your bodies (and pieces of cloth, if you are using any)!

As a warm-up, lead the children in making star shapes with their hands. Make a stormy sea all together using actions or a blue cloth, then individually make the shape of a tree and the shape of a rabbit with your hands or body. As a final challenge, use your bodies to act out an explosion in space!

Give out the first six readings. Work together as a whole group, or divide the readings between smaller groups of children. If you have them, they can choose the coloured cloth(s) they want to use. The children should decide how they are going to represent each day, using their bodies as expressively as possible. Give them a short time to practise.

To tell the story, either a child or a leader reads each Bible passage aloud in turn, while the group energetically acts out their representation of that day of creation. By the end, everyone should be quite tired! Invite everyone to lie down and make themselves comfortable as you read day seven. Explain that this will be followed by a short time of quiet and stillness so they can rest and think about everything that happened in the story.

Encourage everyone to lie still and stay quiet for a short time.

Invite the children to be creators. Can they design a new plant or creature the world could benefit from today, for example a lizard that can digest plastic or a tree that produces fruit all year round? As they draw, chat about why their creation would be a good addition to the planet. What does our world need today? What can we do to help?

Teach the British Sign Language signs for ‘Nothing’ and ‘Everything’ (search signbsl. com for ‘vacuum: the absence of matter’ and ‘everything’). Practise doing the actions together whenever you say “nothing” or “everything”. During the prayer, encourage children to ‘supersize’ their ‘everything’ sign to indicate the hugeness of creation, so that by the third instance they use their whole bodies and stretch out their arms as wide as they can reach. Then say this prayer: