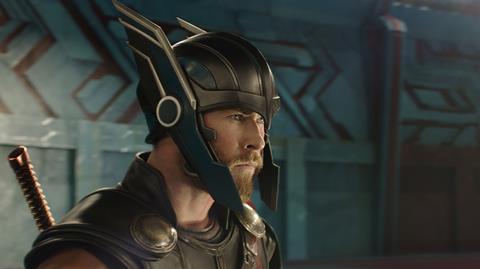 In the third Thor film, Thor finds himself trapped on the planet of Sakaar. Meanwhile, a new threat rises as Hela, goddess of death takes over Asgard and plans to conquer the universe. In order to get home, Thor must compete in a gladiator match against the defending champion of the Grandmaster. Little does he know that the champion is his old friend and fellow Avenger, the Incredible Hulk. Teaming up with Hulk and his deceptive brother Loki, Thor must return home in time to stop Hela and prevent the approaching Ragnarok, the apocalyptic destruction of Asgard.

The clip focuses on Thor and Loki. They are reunited with their father Odin, whose powers are rapidly disappearing and existence is coming to an end. However, before Odin leaves them, he reveals that Thor and Loki have a sister, one he’d kept secret from them due to the danger she poses to their homeland. As they are processing the loss of their father, Hela appears, beats both brothers and destroys Thor’s hammer, the source of his power. Thor and Loki are separated and Thor wakes up lost on a new planet.

After watching the clip, discuss:

Read Job 1:13-22 together (if you wish to add context, start from the beginning of the chapter). Then discuss the following questions.

How do you feel about Job’s response in verse 21? Is it a realistic response to give? At some point, you may wish to show your young people the whole film so you can explore the full reason why Odin hid Hela’s existence and whether he was right to do so.