How a letter writing ministry is impacting 450 teenage girls 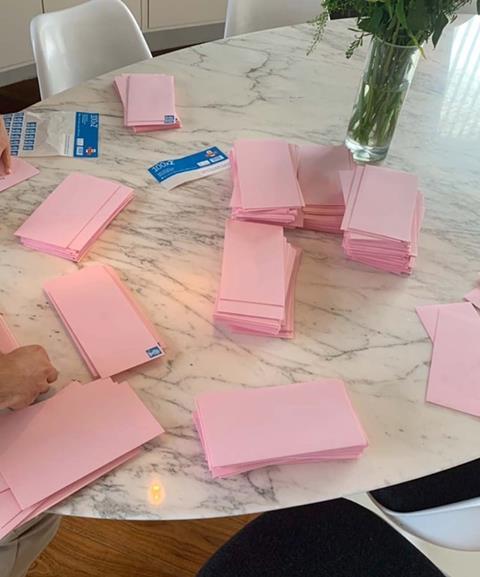 The Pink Letters idea came when one of my younger sisters was struggling with a number of things which I had faced at her age.

For me Year 9 was especially tough. The hot and coldness of friendships, the exclusion of conversations because I was a Christian, the battle of knowing which parties to attend to depending on who was going and juggling being a cool school kid and perfect church kid all got too much. I felt guilty for living this double life and there was no one I could talk to about experiencing school as a Gen Z with social media and extra pressures added on.

I asked my younger sister how I could support her best and she said that writing to her regularly would be the way. So I decided to write to her using pink paper and envelopes and expand this to support other young people in our youth group - hence ‘pink letters’. I used a simple Google form (where girls could sign up to receive a letter), thinking I’d maybe reached the 50 or so girls in our local youth group at St Peter’s Brighton. Well within a few weeks it had become 200 girls and within six months 800!

I had planned to move to New York in September 2019 (to fulfil a childhood dream to live there) and around this time I had a conversation with someone about GDPR (legislation that governs comminications). And I panicked and just thought, I don’t know if I can go on! So Pink Letters stopped.

I lived in New York for a year and God didn’t stop talking to me about this. Every time I chatted to him, he seemed to bring it up, to the point where I just didn’t want to talk to him anymore! I was working as a PA in a church in New York City in a very full on role so I just did not have the mind space for it.

Then the pandemic hit, and I moved back to the UK and felt the need to just go for it again, and had the space and the time to do it. So I quit my job and I’ve basically been doing Pink Letters full time from March 2022.   We’re in the the process of becoming a charity so we’re currenly running off donations from generous people who have really believed in it and have given to it.

I write an encouraging letter once a month to those who have signed up, and since we resumed we have built to to 450 teenage girls. It’s really exciting and this time I have checked that we are OK with any GDPR concerns.

As regards the format, I have a scripture in each one that forms the basis of what I say. I look at themes such as ‘hot and cold friendships’, body image, swearing (the power of our words) and anxiety, which is a major issue of course.

I really wanted these letters to not only reach the Christian homes in the UK, in around the world, but all girls and so I was delighted to hear the story of a girl who told me that all of her college mates had signed up. I asked, ”Are your college mates Christian?” She had said, ”No, but they’re very intrigued. and they’re really happy that they don’t have to turn up publicly anywhere to find out more, but it will just come to their doorstep!”

So the vision really is meeting these girls where they’re at and just to encourage and empower them to be who they’re created to be. There’s a story behind each door and something beautiful about it not landing on their phone, which is so distant, but actually through the letter box with their name on it. If you know someone who might like one, find out more at our website.