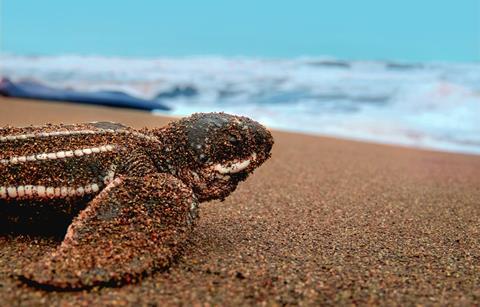 Some time ago, my son and I were on Oak Island in North Carolina (where I was speaking at a camp). The shoreline of the island is a sea turtle sanctuary, and there are signs posted about the stiff penalties for messing with the turtles or their nests.

We had a rare opportunity to see two baby sea turtles make their trek across the beach to the ocean. It was an experience of God’s creation I will never forget.

A little background info (which we got from the turtle rescue peeps who were present):

Mum sea turtles come on shore in the middle of the night, dig a hole in the sand and lay their eggs – dozens of them. Then Mum buries the nest and crawls back to the sea.

The babies have a one in 1,000 chance of making it to the ocean. Even if they hatch, and do so at a time when others are also hatching (which, collectively, gives them the ability to dig up through the sand to the surface), foxes and other predators really like them some baby turtle num-nums. And, even if the baby turtles make it up and don’t get munched, they can easily get lost, head in the wrong direction and not make it.

So you can see why, with all of that up against them, it makes sense that there are volunteer sea turtle rescue folk who help the process along. They walk the beach every morning, looking for new nests (which they can find because of the track made by the mother).

If the nest is still intact (and hasn’t already been assaulted by a fox or some other predator), the volunteers put a cage around it to protect it. Every evening, other volunteers check the nests. And, after the appropriate gestation period, the volunteers assist the babies in making it to the sea.

Now, they can’t just dig up the hatchlings and carry them to the ocean. Just as helping a butterfly out of its cocoon will rob it of the strength it needs for survival, baby sea turtles must make the trek to the ocean on their own.

So the help the rescue people provide is in setting up a little runway of sorts – side rails to point the way and smoothing out the sand. When my son and I were watching, most of the eggs had already hatched.

The volunteers were doing their final step of digging up the nest, counting the hatched and unhatched eggs (which they report to some university) and seeing if there are any hatched babies who didn’t make it to the surface. They found two of these little ones when we were there, and set them at the beginning of the ‘runway’.

One of the little guys (or girls) got disoriented about halfway to the ocean, turned around and started heading in the wrong direction. The volunteers explained that you can’t shine a light (or use a flash), as it will damage their eyes; but a red light will not hurt them and they’ll head toward it.

Luckily, my little iPhone flashlight app lets me change colours; so I set it for red and the volunteer held it close to the sand on the ocean side of the disoriented hatchling. He quickly turned around and scurried in the right direction.

They are so tiny – about 5cm long. And they will get so freakin’ huge. Watching them scuttle along the sand is an amazing snapshot of God-given instinct, fragility and, particularly, persistency. It’s a little hard to describe why this would be so emotional to watch.

The best word I can come up with for it is beauty. It was not a significantly different feeling I had when I have stood in front of the Monet water lilies in Paris, at the Musée de l’Orangerie, or when I looked at my own perfect little babies. There’s something about true beauty, in whatever its form or presentation, that both reflects God’s values and creativity, as well as connects with an image-of-God part in me. 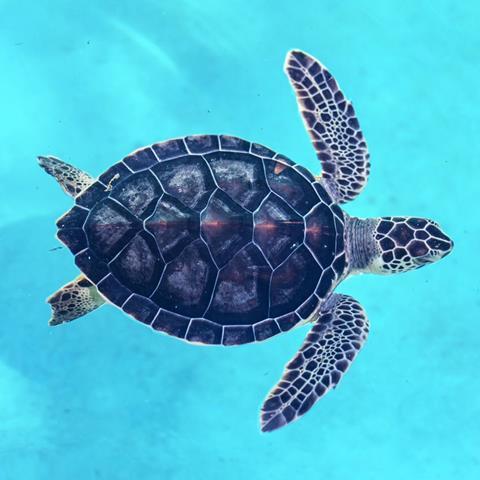 When the babies reached the smooth, wet part of the sand, they took off. They were already moving quickly (for their size). But with the scent of the ocean in their noses, they seriously busted a move.

The remains of a wave, gliding with its last few inches of momentum, caught them in a half-inch of water. And their little flippers took off in hyper-swim mode, as if to say: this is what I was made for; even though I’ve never been here, I know this is my home.

I almost cried when they swam beyond my sight, propelled way more by the receding current than by any effort of their own. I swallowed hard and wore an irrepressible smile on my face.

Beyond the experience of seeing such a rare and stunning beauty, I think I connected with this experience for other reasons. You don’t have to look very deeply into this description to see all kinds of allegorical connections to our human experience. Bottom line: I am that baby sea turtle over and over and over again.

I have thought of those little sea turtle babies many times since I was given the gift of meeting them. Helpless, really, but destined for a large and long existence of non-rushed swimming in the ocean. I want the kingdom-of-God allegorical equivalent of that.