Where are all the influencers?

“This could be game-changing for youth ministry!” – new research about young people sharing faith offers invaluable insights for the future of church youth work. Dan Randall, youth director at Hope Together takes us through the stats. 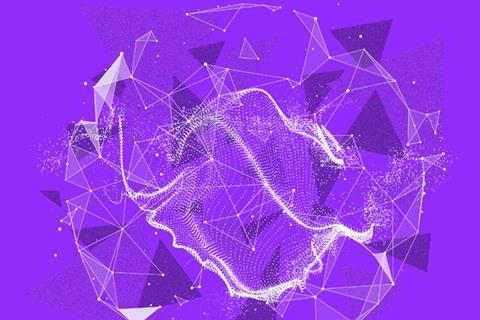 We’ve known for a long time that young people’s behaviour and attitudes are particularly influenced by their peers during adolescence. But when the existing structures of church life were shaken by COVID-19, we were reminded of just how important these relationships are.

Youth leaders across the country were left with questions about how we can better understand the significance of peer connections when it comes to faith sharing – and about how young people can best be supported.

At the launch, someone commented: “This could be game-changing for youth ministry!” It does seem like God is doing a new thing in this generation. At the same time, there are key challenges we should pay attention to.

However, there were also some striking differences between the perceptions of young people and their youth workers.

HOPE Together, Alpha, Church Army, Church of England, Scripture Union, Youth for Christ and Youthscape jointly commissioned 9 Dot Research to lead this piece of work, which had three elements:

You can watch the launch back on the HOPE website, but here are some of the key findings, as well as some questions for reflection on future practice…

What did this research tell us?

The survey showed that 38 percent of Christian young people said that other Christians around their own age had “a big influence” on them becoming a Christian, while 39 percent said they had “a little influence”.

The top ways young people reported being influenced themselves were through peers helping them develop their own faith (56 percent), friends telling them about their faith and being invited to something (51 percent).

What we know about young Christians sharing their faith with peers

A third (34 percent) of young Christians told us they share their faith regularly. Most young people reported influencing their non-Christian peers to explore Christianity either “a little” (49 percent) or “not much” (30 percent).

Of the young people who felt they had influenced their peers to explore faith:

Just under a third of young people surveyed (31 percent) said they share their faith on social media.

The barriers to young people sharing their faith, and how we can support them

70 percent of young people agreed or agreed strongly that they should try to encourage others to become Christians and just over half (51 percent) agreed that sharing their faith “helps me remember why I am a Christian”.

The top barriers to faith, as perceived by young people, were not knowing answers to difficult questions (38 percent) and their peers not being interested (36 percent). 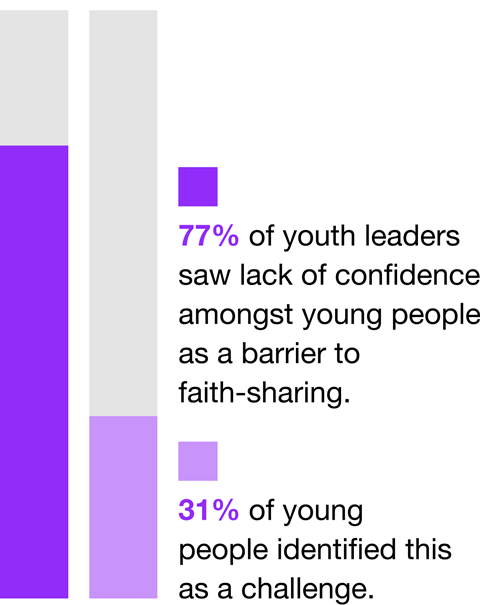 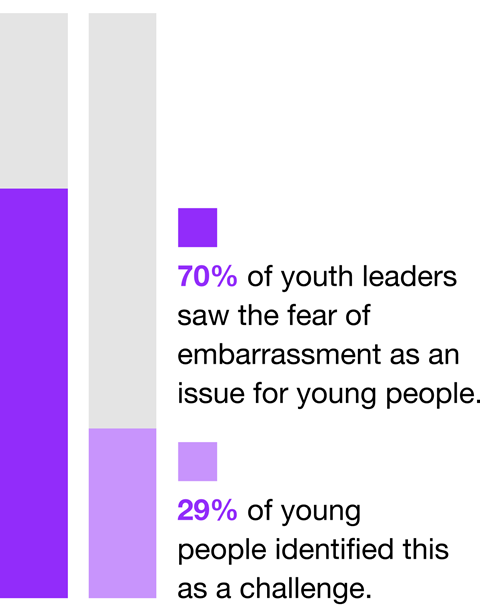 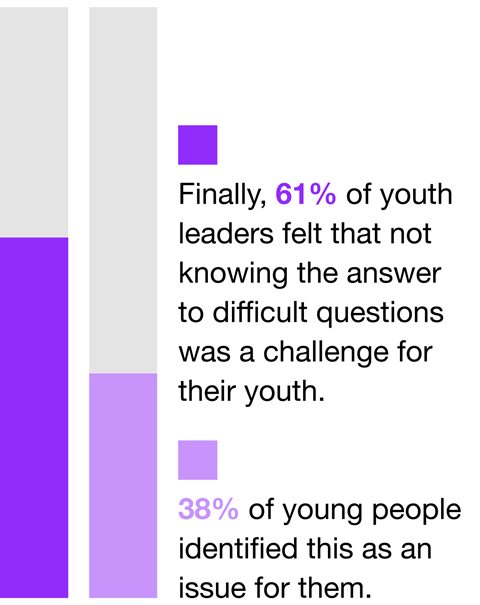 The top ways young people wanted support were to talk to others about sharing faith (40 percent) and to hear about other people’s experiences of doing so (39 percent). 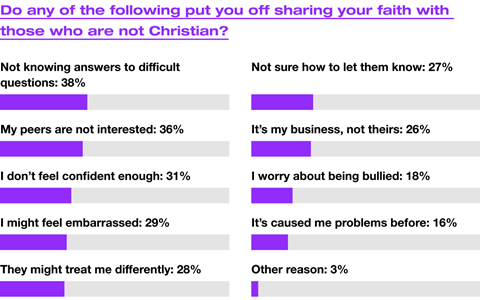 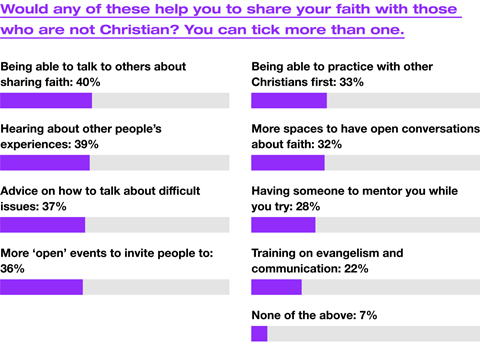 The role of the church

Youth workers told us that 39 percent of their church youth ministry was focused “solely” or “mainly” on retention (helping disciple young people primarily from the church community), compared with eight percent whose sole or main focus was on outreach.

Of the young people taking part in the research, 87 percent were from a churched background, where they and / or members of their family attended church services regularly.

The report highlights a range of implications this research may have for youth ministry in the UK moving forwards. Here are just a few:

The research invites us to take an honest look at our youth ministry, and whether we are reaching out to those beyond the Church

Having Christian friends is clearly important for young people’s faith, so peer support for those growing up in church is vital.

How might this shape the outreach of churches, especially when half of the churches report having no active disciples from a non-Christian home?

This may be a moment to pause and reflect on what it is, within ourselves and our organisations, that feels like a barrier to being more outward focused. What are our own experiences and beliefs about peer evangelism? And how are these shaping the young people we support?

The research suggests that many young Christians are open to sharing their faith and want to talk about it. How can we create contexts where young people can hear and tell stories of faith-sharing? 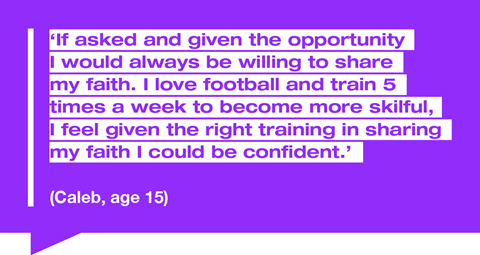 The research also challenges us to examine the gaps between the perceptions of young people and youth workers. There is always space to allow our youth work to be shaped more heavily by the voices and experiences of young people.

Sharing the research directly with young people could provide an opportunity to affirm and encourage the various ways it’s possible to share faith with friends – disrupting the idea that there is one set way to influence others.

Encourage young people that they are, and can be, influencers

Young people aren’t sure they have much of an influence on their peers, and it is often hard to know exactly what difference we do make. But one important thing we can do is help young people understand that the way we speak, act and treat people is noticed and does matter.

Young people don’t need to know all the answers, have unwavering faith or be perfect to tell their friends there is something good about Christianity.

How else can we support young people on their journey of sharing faith? The conversation continues! To download the full report for free please visit our website.