‘I want to watch this show more than my pre-schoolers!’ Why ‘Bluey’ represents everything good in Children’s TV

Claire Hailwood suggests that this Australian animation is a winner with pre-schoolers, and parents too 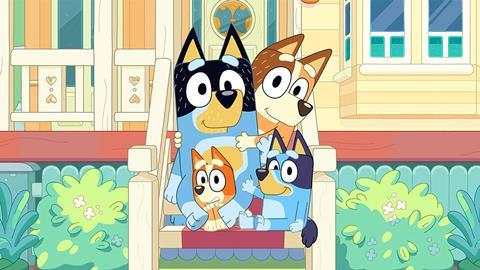 Running Time of each episode: seven minutes. There are over 140 episodes

Overview: Bluey is a six-year-old Blue Heeler puppy who lives with her Mum, Dad and four-year-old sister, Bingo. Cbeebies describes Bluey as ‘inexhaustible’ and Disney plus tells us that she ‘loves to play and turns everyday family life into extraordinary adventures, developing her imagination as well as her mental, physical and emotional resilience.’

What I liked:  Here are four reasons why I think Bluey is fantastic children’s programming

The central character is female and she’s blue (in colour and name). There are so many ways that this show gently subverts the ‘norms’ of family life, and not making her traditionally ‘girly’ or ‘pink’ in colour as well as the protagonist makes me want to cheer loudly! In a world where little girls’ clothing ranges are still predominantly pink and pastel, and little boys’ clothes are mainly blue or primary colours, this is a welcome change.

In this show, although both are great representations of great parents, the hero is Dad (Bandit). He is present, hilarious, playful and imaginative. He’s heavily involved in the day-to-day home jobs and childcare, famously sitting on a yoga ball when working at a computer telling Bluey: ”I wrecked my back changing your nappies”. In comparison to Peppa Pig or The Simpsons where the Dad figure is belittled or portrayed as inadequate, this is a refreshing portrayal of a great Dad trying his best to raise his kids well.

He’s also real and flawed. There are times when he reacts wrongly: in one episode making Bingo cry, but he’s quick to acknowledge his mistake, apologise and sit with her as she processes her emotions.

It’s another subtle subversion of the ‘norm’ (which isn’t helpful or accurate) that feels helpfully countercultural and empowering of men as Dads.

3. Mum and Dad are #couplegoals

There’s an episode called ‘tickle crabs’ where Mum and Dad are seen lying comfortably with one another on a sofa and the kids rush in announcing that they want to play ‘tickle crabs’, at which point Mum scarpers because she knows what’s coming and doesn’t want to play! Throughout the episode as Dad plays / endures the game, we hear him calling (in jest, mostly!) for his one true love for back up, only to find her hiding in the cupboard. For anyone who co-parents in the same home, this will be a familiar scenario.

Towards the end of the episode, Mum reappears and takes over the game from Dad leaving him to go have a break as the children squeal with delight. It’s a beautiful picture of parenting together, which is not often represented on our TV screens.

Both parents are emotionally aware and available with an emphasis on Dad’s presence and ability to support his daughters with their big feelings. In one episode called ‘baby shower’, Mum goes out at bedtime and their daughters miss her. Dad distracts and plays, but when that isn’t the most appropriate strategy, he sits and talks with them about what they’re feeling. He acknowledges their sadness and worry, addressing their underlying feelings, but also invites them to consider things from Mum’s perspective.

Of course, in real life it might not work out quite so neatly and there would be other factors at play (like hunger and tiredness!) but because Bluey is not a documentary series, but a playful exploration of family life, it’s a beautiful example of gentle parenting that you can see will grow maturity in Bluey and Bingo (and depth in Dad too!)

Thoughts for parents: I’ve been watching children’s TV for the last 15 years or so as we’ve been raising children in our home. Some of it makes me want to tear my hair out, much of it is fairly inane, and then once in a while a show comes along that I want to watch as much, if not more, than my preschoolers. Bluey is one of those shows.

It’s a beautifully observed animation, with countless moments that are so relatable for anyone parenting. From Dad’s love of the hospital game (because he can basically lie down the whole time) to the mess on the backseat of the car, from the crazy amounts of energy the children have in the morning to their endless questions (and the brilliant reactions from Mum and Dad).

It’s a show that adults and children alike can laugh at and be inspired by. ‘Be more Bandit’ is a phrase that’s becoming more commonplace in our home and I’m delighted!