Ready to use games – Up-front games 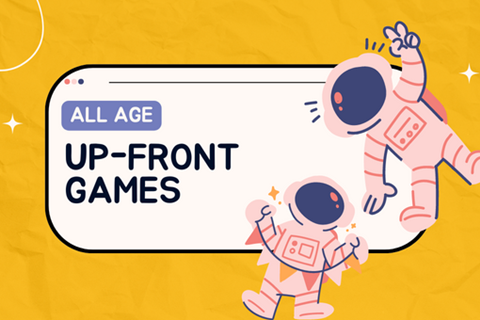 Nothing beats an up-front challenge game! (OK, I might be overstating that somewhat, but they are good.) Invite some volunteers the front of your room to compete in a challenge; get the rest of your group to cheer for the competitors as they play.

You might like to play the same game over a few weeks and keep a leaderboard of scores to see who is the best! Change the challenge game every so often so that children or young people have the chance to try something new.

THE BEAN AND CHOPSTICK GAME

Give each player two bowls – one full of beans and one empty – and a pair of chopsticks. They have to move the beans one at a time from the full bowl to the empty one. The person with the most beans in their once-empty dish after a minute is the winner. Larger beans, such as butter beans, will be easier to get hold of with the chopsticks; smaller beans, such as haricot beans, will make for a more difficult game!

A variation of this is to use straws (paper ones, of course) and small round sweets. Players have to move the sweets using the straw – they suck a sweet onto the end of the straw. Lighter sweets such as Maltesers will be easier to move than heavier ones like Skittles.

Another game with a similar concept is to put petroleum jelly (or similar) onto the noses of the players. They then have to stick their face into a bowlful of cotton-wool balls in order to stick one to their nose. They then shake it off into an empty bowl.

You will need: empty cereal boxes (the same size); scissors

Put a cereal box in front of each player. The players have to bend over and pick the box up with their teeth. Only their feet can touch the ground (they can’t put their hand or knee down). Once everyone has done that, cut a section off the top of each box (the same amount for each box) and challenge the players to pick up the box again. If a player can’t do so, they are out. Keep cutting the boxes down until only one player is left. It might be worthwhile marking  out the sections on each cereal box before the session, so that the game is fair. If you’re keeping a scoreboard, make a note of how many sections a player completes.

Alternatively, cut the cereal boxes into the same number of horizontal sections. Mix the sections up and stack them up one on top of the other. The players have to stack the sections back in the right order using only their teeth. Time the game so that each player can have an entry on the leaderboard, if you’re keeping one.

You will need: pairs of very large underpants (one for each player); stopwatch

Give each player a pair of underpants and line them up at the front of your space. Challenge the players to put on and take off the underpants as many times as they can in one minute. The contestants should put the pants on over their own clothes (obviously). They have to pull them right up and then take them right off for it to count. You might want to have some adjudicators watching to make sure the players are obeying the rules! The winner is the person to have put the pants on and taken them off the most times.

You will need: After-Eight mints (or a non-branded alternative); stopwatch

A stone-cold classic. Give each player a mint. Ask them to lean their head back and place the mint on their forehead. Using only their facial muscles (and with a little help from gravity), they have to move the mint from their forehead to their mouths. If the mint falls off their face they have to start again (if the mint falls on the floor, give them a new one). The winner is the first person to get the mint into their mouth. If you’re keeping a scoreboard, time the game so that each player can have an entry on the leaderboard.

If you have any children with food allergies, make sure you have an alternative so that everyone who wants to can take part.

Before the session, attach the back of the tissue box to the middle of a long strip of material using the needle and thread (a few simple stitches should do it). You should then be able to tie the tissue box around your waist using the strip of cloth. Make as many ‘tissue-box belts’ as you need – one for each player. Fill each tissue box with the same number of ping-pong balls.

Tie a tissue-box belt around the waist of each player, making  sure none of the balls fall out before the game starts. On the signal to start, the players should move around to try and shake all the ping-pong balls out of the box. The one to do so first is the winner.  If you’re keeping a scoreboard, time the game so that each player can have an entry on the leaderboard