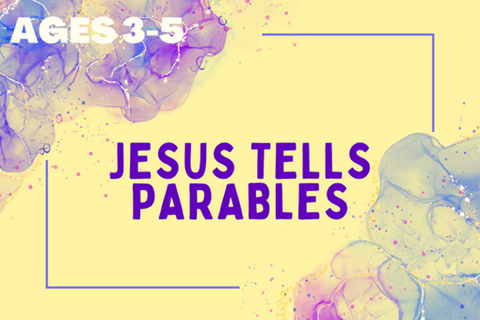 To explore one of Jesus’ parables.

This session plan is intended for use either in person or online, depending on how you’re meeting. Adapt the activities to fit your particular situation.

This is one of Jesus’ most famous parables, but younger children may never have heard it. It’s a powerful tale of forgiveness, love and grace – concepts that our group will struggle to wrestle with in any great depth, but we can help children see that God never stops loving them and, even if they go their own way, he is always there ready to forgive us. Resist the urge to make this just a moralistic tale, but help the children see how much God loves us!

Welcome all the children and share out any refreshments you have. Chat about what the children have done this week. What good times do they want to share? Discuss times when you have done something wrong and had to say sorry to someone. Keep this fairly light; give a couple of funny examples when something went wrong and you had to apologise.

Show the children the soft toys you have gathered together and encourage them to play however they like. Join in with the play and, if they don’t start to themselves, direct their play gently to thinking about families. Chat about the different relationships, but be sensitive to those whose family life is less than happy.

Gather the children and sit them down in a circle and tell this story:

Jesus loved to tell stories. He told stories that had lots of meaning. We can read and listen to Jesus’ stories again and again and we will learn something new every time. This is one of the stories Jesus told.

Once there was a father who had two sons. (Get out one soft toy and sit it in front of you. Put two toys next to the ‘father’, one either side.) One day, the younger son went to his daddy and said: “Give me the money that will be mine when you’re no longer here. I want to go and enjoy myself!” (Move one of the ‘sons’ in front of the father as if talking to him.)

The father was sad. But he gave him the money and his son went on his way. He went to a far-off kingdom. (Move the ‘younger son’ around to the opposite side of the circle. If you can, have another leader opposite you, so that they can move the toys around as you tell this part of the story.)

The younger son made lots of friends and they had lots of parties together. (Place soft toys around the ‘younger son’ and move them about as if they are dancing.) But then the son’s money ran out! His friends didn’t want to know him any more. He was all alone. (Move all the friends away from the ‘son’ and then remove them from the circle.)

The younger son had no money. He got a horrible job, feeding pigs. Then he thought to himself: Even my daddy’s servants live better than me. I will go home and say sorry. I’ve done too many things wrong to be called his son. Maybe Daddy will give me a job as his servant.

Off he went. (Move the younger son back towards the father and brother.) But before he got home, his daddy ran out to meet him! (Rush the father towards the younger son.) His daddy hugged him and welcomed him home. (Make the toys hug and then bring them back ‘home’. Move the older brother a short distance away.) Daddy was so happy that his son had come back. He threw a huge party for him!

Then the older brother came home from work. (Move the brother back ‘home’.) When he found out that his brother had come home and there was a party going on, he was very angry. His daddy came and invited him to the party. (Move the father to ‘talk’ to the elder brother.) The brother refused. His daddy told the brother that the younger son had been lost, but now was found! It was time to celebrate!

• What is your favourite part of this story?

• Can you see yourself in this story?

• Have you ever had to say sorry to your mummy or daddy?

• How did if feel when they forgave you?

With the same soft toys you used for free play and the story, encourage the children to retell the story. Split into pairs or threes, so all the children can have a turn telling the story. Give them space to tell the story however they would like to. Let them play with the story! As they play and retell the story to each other, ask them about the story they’re telling. What’s happening? How do the different characters feel? What are they thinking? Help them to dwell on the love the father had for both his sons.

Invite the children to stand in a circle. Ask them to think about anything they have done wrong, when they didn’t live the way that God wants us to live. Maybe they weren’t kind to their friend or they shouted at their brother. Perhaps they were rude to their grandma or didn’t do what their mummy asked them to. Leave a moment of silence for the children to think. Then ask if everyone has thought of something.

Remind the children that God loves us so much that there is nothing we can do to stop him loving us. Ask the children to say sorry to God for that thing they have thought of, if they want to. Say that, when we say sorry to God, he forgives us and forgets what we have done. He loves us like the daddy in the story, only more!

is resources editor for Premier Youth and Children’s Work.