Gemma Hunt on God leading her to TV

Being on TV may be many young peoples’ dream. Gemma Hunt discovered it was God’s idea too.

The prophetic word spoken was given when I was at Soul Survivor. The word said that I would be ‘salt and light in the dark, godless place of the media’. At the time, I didn’t really know what that looked like. I was 16 and I was living at home and hadn’t fully finished my education.

So I thought, well, what would I like to do? Where’s my heart? I’ve always really loved entertaining children and have a younger sister who is nine years younger than me. My mum was a single mum, and raised us both and so I had quite a responsibility to help look after her. I thought that if I can get into kids telly, then I can hopefully be a good role model for her and her peers.

So I went off to university did a media performance degree in Luton and whilst I was there, I became the president of the Christian Union, which was a really fun and interesting time. At that time, I thought maybe getting into kids TV would be where God wants me. It wasn’t until my third year that an agent came in to give a lecture on how to put together a show reel. Show reels are just clips of someone doing stuff on TV. I had some material on VHS which I showed to her. I said, “well, it’s not brilliant, but it’s something!”.

So a friend of mine helped me cut it from reel to reel in real time in an editing suite, and we sent it off to her and she sent it to the BBC. They had a look and they weren’t terribly impressed. But they said, “well, it’s something and maybe we need to meet Gemma.” Thankfully, the woman from the agency, who had become and is still my agent, put in a good word for me with somebody that she knew at the BBC and arranged the meeting.

I went for a meeting and on American Independence Day 2003, I auditioned for CBC . I also got to look out over the Blue Peter Garden at Television Centre! I had a great time and as part of that, I had to talk for a minute about myself. So I shared a little bit about my faith, and how I came to faith on a Church summer camp when I was younger. I just wanted to honour God from the ’get go  with my career. Now we’re looking at 19 years later and I’ve been working in kids TV ever since and absolutely love the opportunity they’ve given me and had so much fun. 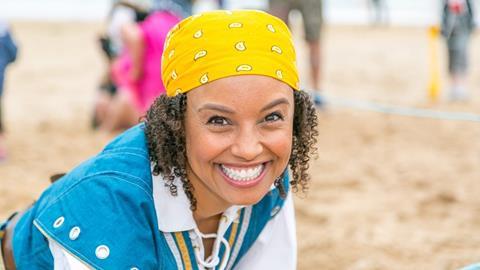 Has the media been a ‘dark place’ as the prophetic word said? I guess it has its places and has its moments and I guess darkness looks very different to lots of people. Sometimes it’s pitch black, sometimes a bit grey! So there have been times when it has been tricky to navigate things that perhaps conflict with my faith. For example when I’ve had to work on Hallowe’en, for instance, and been asked to dress up like a witch or something like that I have really had to check my heart and just say,” hey, Lord, you know my heart, you know my intention, you know that I’m here to to shine your light and to entertain. So it doesn’t matter what I’m wearing, because you’re still going to shine through that.” And so on Hallowe’en, I did have a witch’s hat on and I did present live on TV and but the joy of the Lord will come through that because light always overshadows the darkness.

But then I’ve also had some dark moments whilst in my career in the media, and it’s been my faith that has kept me going through that times when I’ve made some very bad decisions, times when I have let God down and times when I’ve disappointed myself in my faith and haven’t been a good role model as a Christian. God is faithful God is kind and has been very gracious to me in those moments, and helped me to get through them. So the media can be dark, but Jesus is the light of the world and so having him in my heart has helped me to shine through.