Does God have a view on school uniform?

I drove my daughter to school. As we were going up the hill, I noticed a student out of the corner of my eye. Her skirt was so short that I could actually see her underwear! Had skirts always been as short as this? How had I not noticed this before?

A year later and the school has now revamped their uniform policies. However, the new rules seems to have affected only the girls. It states that skirts must be knee length and pleated, dictating both length and style. Arguments from parents started, asking questions about the fairness of a uniform policy which affected only girls. Questions were posed about why society has always dictated the appropriateness of women’s clothing. Statements were made about why we were not addressing the bigger issue of rape culture, the pornography industry which often uses images of school girls in short skirts and the patriarchal system that his dictated for far too long what women can do in society. 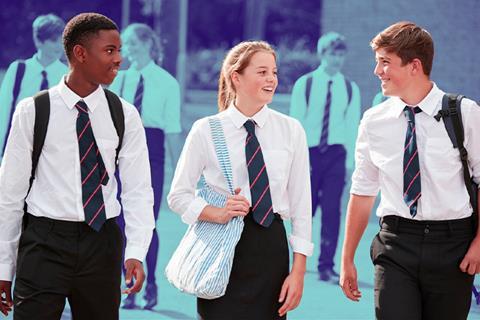 School uniform has been debated for years: itchy jumpers, knee length skirts, uncomfortable blazers, interview-style black shoes. Every school has a uniform policy and just about every child tries to stretch or bend that policy in order to express their own individuality. But when is pushing the rules too far? Should we start addressing some of the bigger questions about how society views gender equality? And what does God say about it all?

The School Wear Association states that “school uniform plays a key role in promoting pride, self-confidence and a feeling of belonging within the student body. These factors contribute to the student’s well-being”. Yet some people would argue that what a student wears does not affect their learning. My daughter was challenged the other week for wearing trousers that were too tight. The ‘infraction’ was dealt with during maths, meaning that she actually missed that lesson. Her trousers did not deter her learning, but the staff policing their policy did.

There are some parents and educators who would say that a uniform levels social status and the need for children to feel pressure to keep up with the latest trends in fashion and labels. This can be especially helpful in schools where the catchment area means that pupils attend school from both the poorest and wealthiest areas.

The Children’s Society released a report in 2020 which stated that the average cost of a uniform is £315 per child per year. The report also stated that due to the rising costs of uniform, almost a quarter of parents have sent their child to school in ill-fitting, unclean or incorrect uniform which in turn has led to their child being bullied, feeling left out or even excluded from school. The government have statutory guidance in place for school governing bodies, helping those families who find buying uniform a financial stretch.

My first response as a Christian parent should always be, what is God saying. There are many key Bible verses that talk about how I should parent. Proverbs 22:6 says: “Start children off on the way they should go, and even when they are old they will not turn from it.” This comes with helping a child understand who they are in Christ as well as teaching them what God’s word says. 1 Peter 3:3-4 says: “Your beauty should not come from outward adornment, such as elaborate hairstyles and the wearing of gold jewellery and fine clothes. Rather it should be that of your inner self, the unfading beauty of a gentle and quiet spirit, which is of great worth in God’s sight.” There are so many times that the Bible has given me answers to life’s problems.

So with the expense of uniform, rising living costs, gender discriminatory uniform policies and the conflicting research about its purpose, should school uniforms still be worn? I know that this will be a debate that will continue for many generations. However, my response as a Christian parent should be to help my daughter navigate the complexities of life with grace and wisdom. To help her speak out with grace filled truth when she sees injustices and to learn to understand that when her heart is full of the truth of who she is in Christ, that shines greater than anything she can wear on the outside

Dawn Savidge has been a single parent for 15 years and blogs at www.soloparentfaithadventure.com