Did Jesus really rise from the dead?

It’s hard to scientifically prove whether Jesus rose from the dead. But, like in a law court, eyewitnesses play an important part in helping us figure out what actually happened. 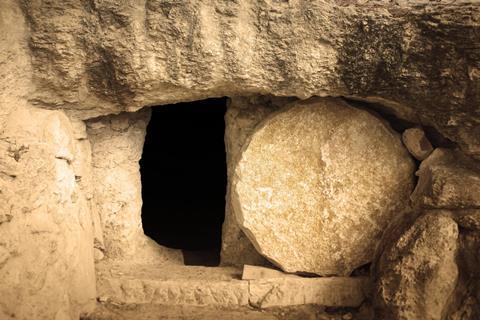 We asked some Year 7s to think about Easter:

“Did Jesus actually rise from the dead?”

“I think yes because he was God.”

“But dead people don’t come back unless they’re zombies.”

At the heart of the Christian faith is the belief that Jesus died and rose again (check out chapter 15 of a book in the Bible called 1 Corinthians).

It’s hard to scientifically prove whether Jesus rose from the dead. But, like in a law court, eyewitnesses play an important part in helping us figure out what actually happened. In 1 Corinthians 15, Paul lists some people who claimed they had seen the risen Jesus. These include several individuals as well as a group of 500 people. However, if they were all mistaken, here are some alternative theories.

Crucifixion was brutal (‘excruciat - ing’ comes from the Latin word for ‘crucify’). And even before this, Jesus had a crown of thorns pressed into his head and was flogged by a whip with pieces of metal and bone, which would have ripped away his flesh. Numer - ous people died from this procedure alone.

In John’s Gospel, a spear thrust into Jesus’ side produces a flow of blood and water (John 19:34). Many have argued that this indicates blood clotting in Jesus’ arteries, which points to heart failure and death.

Someone stole the body

The Roman soldiers who guarded tombs were apparently more hardcore than Royal Marines. Jesus’ disciples would have been in mourning; not eating properly and incredibly weak. Would they have been able to overpower the guards to steal Jesus’ body?

Most of the early disciples were viol - ently tortured and killed for their faith. If they knew that he hadn’t really risen again and Jesus was a fake, would they really be willing to die for an elaborate lie?

If the Roman or Jewish authorities stole the body, why didn’t they produce it to prove that Jesus hadn’t really risen from the dead?

If tomb robbers stole the body, why would they leave expensive spices and grave clothes (used to cover the smell of rotting flesh) and steal a worthless body?

Hallucinations (an experience of seeing something that doesn’t exist) usually occur among people with vivid imaginations. The disciples don’t really fit this description. Take, for example Matthew, a shrewd tax collector; Peter, a tough fisherman; and Thomas, a born sceptic.

There is also no such thing as a collective hallucination, yet groups of people claim to have seen the risen Jesus at the same time (1 Corinthians 15:5).

Hallucinations tend to focus on expected events, but the Jewish concept of resurrection (rising from the dead) is completely different from what happened to Jesus. The disciples would have been as surprised about Jesus rising from the dead as we are.

If someone wrote a fake news story about a celebrity, the wounded celeb would make sure the public knew it wasn’t true. In 1 Corinthians 15, Paul names people who saw the risen Jesus. He encourages people to check his facts with those eyewitnesses. If Paul had written a false story, or those yewitnesses had made stuff up, people would have corrected them, just like the wounded celebrity.

Sometimes things that seem unlikely appear more likely when we’re given event-based evidence. An example often used in criminal law cases is this: if someone thought they saw a lion walking through Regent’s Park in London, this would be unlikely. You would think they had seen a large dog and got confused! However, it becomes much more likely if we discover that a lion has escaped from London Zoo (which is inside Regent’s Park).

Likewise, when looking at the factors surrounding Jesus’ death, the events that occurred afterwards and the eyewitnesses’ testimony, the resurrec - tion appears to be the most likely expla - nation. None of these other suggestions seem to satisfactorily explain the hundreds of people who believe they saw the risen Jesus, the sudden fearless - ness of the disciples and the dramatic growth of the early Church.

With no convincing alternative, the evidence points to Jesus rising from the dead. As Sherlock Holmes says: “When you have eliminated the impossible, whatever remains, however improb - able, must be the truth.”

If your children or young people would like to take part in asking and helping to answer questions, please get in touch at ycw@premier.org.uk