Finding Jesus as a Millennial

Christian YouTuber Jon McCray explains how his Big Conversation with Mikhaila Peterson shows why Millennials and Gen Z don’t get Christianity and what we can do to change it. 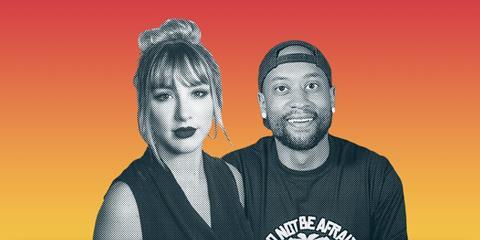 I had the pleasure of joining Justin Brierley recently in a discussion with Mikhaila Peterson to discuss the question: Are Millennials and Gen Z ready to believe in God? In addition to that question, we were also able to discuss the process of Mikhaila’s spiritual journey that led her to professing faith in Christ as a new Christian.

I was pleased to hear Mikhaila say that she believes in Jesus Christ and now considers herself to be a Christian. What I found particularly interesting about her conversion was how similar, but yet how different her and my journeys to Christ were.

In listening to Mikhaila’s podcast before our discussion, I quickly found that she is the type of person who is wired to be sceptical and to take more of a rational approach to things before accepting a position.

When it came to the question of God’s existence, she has historically considered herself to be more of an agnostic, not really sure if God existed or not.

But in recent years after a series of different events, she seems to have come to the conclusion that the hard sciences can’t explain everything, and this realisation has led her to become more open to the possibility of a metaphysical component to reality.

When it comes to what led her to believe in God – and ultimately Christianity – she describes her conversion as being the result of several coincidences that defied a strictly rational explanation, all of which pointed to God’s intervention in her life. It was this series of events that enabled her to start reading the Bible and ultimately converting to Christianity.

When it comes to myself, rather than taking a rational approach to most things, I was more the type who would believe things based on how I felt at the time, as well as coincidences that seemed improbable on the surface.

This led me to be something of an agnostic as well, swinging back and forth between belief and disbelief in God, depending on my moods and the sorts of situations I found myself in.

It was only after I took a class on the philosophy of religion that I found myself convinced by some of the rational arguments for God’s existence. These arguments opened me up to the realisation that discovering God’s existence didn’t have to be a purely a-rational pursuit, but could also be an intellectual one. As a result, in time, I found myself intellectually persuaded by the historical evidence for the resurrection of Jesus Christ, and fully embraced Christ and Christianity.

During the conversation, we also discussed the topic of why some Gen-Zs and Millennials reject the existence of God. Mikhaila talked about this being the result of a ‘bumper sticker’ approach to Christianity that she personally found to be a turn-off prior to her conversion.

She seemed to be referring to those who promote slogans that come across as condescending and antagonistic towards non-Christians, rather than persuasive or intelligible.

She talked about the fact that some people who are religious don’t seem to know how to talk to people who haven’t had the same experiences. As a result, they aren’t having as much success in reaching non-believers.

I agreed with her on this, as I too found Christians to be condescending, rude and arrogant as well. I was also turned off for similar reasons prior to my conversion. However, towards the end of the conversation, I was able to explain what helped me in my situation – an understanding of how the gospel can and should prevent Christians from being condescending, rude, or arrogant.

If we believe that we aren’t able to earn our salvation, then we know that we weren’t saved because we are more spiritual, moral or more religious than non-believers. If we truly believe this, then how could we possibly feel superior to non-religious people?

The answer is, we can’t. I believe that the more we internalise the humbling message of the gospel, the more it should prevent us from feeling any sense of superiority over the non-believer, and this shapes how we interact with them.

However, although I agree with Mikhaila’s response as a reason why fewer Gen-Zs and Millennials are accepting religion, I took a different approach to answering this question.

It’s my view that it’s not true that Gen-Zs and Millennials are far less religious than previous generations, but that the studies are often asking the wrong questions, making them harder to categorise.

How Gen-Zs and Millennials construct religion

It seems to me that, in the past, people would look at worldviews as a whole, and by choosing a worldview, they would be choosing a unified set of beliefs or propositions. But this is no longer the case for how younger generations think about their religious and spiritual beliefs.

It seems to me that, for most people, it’s not about looking for a set of consistent and systematic worldviews and choosing which one they want to believe in. Instead, it’s more-or-less starting from the absence of a worldview, and then slowly selecting individual parts from different worldviews, choosing the parts that make the most sense to them personally, or that they find to be the most personally useful.

This is consistent with a study published in May of 2021 by The Cultural Research Center at Arizona Christian University, in which they call this sort of approach to religion ‘syncretism’. In the study, they say that 89 percent of Millennials hold to syncretism, which is a mix of various worldviews that can provide a personalised understanding or response to life.

In my view, this helps to make sense of what those who identify as ‘Nones’ or ‘Spiritual but not religious’ are saying as well. The Nones aren’t usually saying that they don’t hold any religious beliefs or that they don’t believe in God, but instead, they’re usually just saying that none of the available worldviews for them to choose from are capable of giving an accurate description of what they believe, since their views are specific to them as individuals, rather than consistent with the tenets of a specific systematic worldview.

I spend my time running a YouTube channel and website, Whaddo You Meme, that seeks to introduce Gen-Zs and Millennials to the gospel of Jesus Christ. I want them to realise that they don’t have to construct their own religious identity: Jesus is the only one who can offer us true religion and an authentic identity that isn’t dependent on our own works and striving.

Watch Mickhaila Peterson and Jon McCray on The Big Conversation.