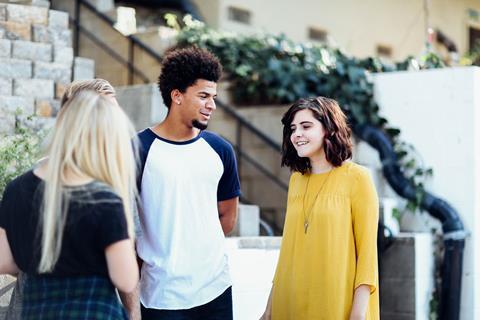 I’d just taken my first mouthful of lunch after a busy morning at church when my teenage daughter announced: “Mum, that new girl in church is really weird. She didn’t say anything all morning and gave us dirty looks the whole time. I don’t think she’ll stay in church and if she does she won’t have any friends. That’s what me and Molly think anyway.”

I knew exactly who my daughter was talking about. I’d spoken to this girl’s family that same morning. I’d heard the story, the cries of their heart for the children in their care, the reasons for their visit to church today. We’d shared our feelings about raising teenagers and how that felt overwhelming sometimes, but our desire that they would know God and who He’d created them to be. We spoke about the powerful pull of the culture around us and the influence of some of the things in the world and its impact on our children. We laughed about the joy of having teenagers in our home and how neither of us felt ‘old enough’! I knew this ‘new girl’ was anxious and eager for friends and that her current experiences in education meant she lacked confidence. I guessed that the ‘dirty looks’ were unlikely and not personal, but simply the way that anxiety worked out in her - an unconscious defence mechanism to keep a perceived threat (in this case, her peers!) away.

I finished my mouthful which gave me a chance to consider how to respond.

I’d learned all this from the conversation and the understanding that I’d developed over the years of being an adult. I could have immediately presented these findings to my daughter to show her what was going on, imparting my wisdom and new found knowledge and ‘teaching’ her about inclusion and unity. I could have expressed my displeasure at her attitude, at her unwillingness to include others and the judgement her words contained. I could have agreed with her that this girl sounded a bit weird and carried on eating my lunch (definitely the easiest option).

Instead, I acknowledged her experience of the morning – “oh it’s not nice when you feel like someone’s looking funny at you is it? I bet that did feel a bit weird. It’s often a bit different when new people come in or someone else isn’t there”.

I didn’t agree with the things that she said that jarred with my desire to raise children who included others! I did acknowledge her experience, remembering that she’s still growing and learning, and it probably triggered some feelings in her that were important to explore alongside some of the things she said.

I took another mouthful of lunch (I’m learning that it’s best not to be ‘hangry’ in these kind of conversations) and asked a few questions to try and encourage some reflection, drawing on those years of youth work and spotting an opportunity for informal education (and recognising that I would probably learn something too!)

I’ve listed a few questions that I remember below, but never posed them like it was an interrogation! It was a casual conversation over lunch that was interrupted by my three year old wanting to sing us a song, my eight year old telling us about his love of Yorkshire puddings and my other teenager trying to make arrangements to see a friend that afternoon and other things that happen around a busy table

- Did anybody try and chat with her? Why do you think they did / didn’t?

- How do you know it was a dirty look? Could it have been something else?

- What’s the point of church? Why do we go? Why is it important to us?

- I wonder what she was feeling - I wonder if she was cross like she looked to you?

- Do you know why we often have people over for food?

Some of the conversation was insightful and my daughter was able to consider a different perspective than the one she had initially taken. Some of it was challenging, in the moment around the table, but also afterwards as I reflected on some of the underlying attitudes expressed and felt (not just by my daughter). My suggestion that we might have this girl and her family over for lunch was met with initial horror, but then she softened (a little) to the idea as we talked some more. There was laughter involved - we remembered some funny times we’d had with new people around our table, some of which were embarrassing (mainly for me but that was OK with my daughter!) and others that had led to great friendships being formed.

As we continue to build a culture in our family that welcomes others in, that pursues unity (in our home, church and community), here are three things that I’m continuing to commit to, as an imperfect parent raising imperfect kids!

1. Model it and celebrate it!

These kind of conversations around the table are important but if we never invited anyone new in or didn’t live what we were ‘teaching’ then our teenagers will quickly see through us and may rightly call out our hypocrisy. Unity is something that is better caught than just taught, so we’re going to continue to prioritise inviting people into our home even where there’s a cost or it’s awkward!

When I see our children welcoming others, talking to them, including them or trying their best to, we’re going to celebrate it and them. We’ll do that in all kinds of ways to encourage this part for them to grow and be fruitful.

The teenage brain is a developing brain so self-awareness and the ability to notice others and respond accordingly is still forming, particularly in younger teenagers. I need to remember that - perhaps you do too? Sometimes we have unrealistic, unfair expectations of teenagers to respond as adults do (which isn’t always perfect is it?!). But we do have the privilege as those raising teenagers to be part of this brain development. That’s why asking questions is a powerful tool - it empowers young people to consider what they think and develops reflective skills.

We also do a lot of ‘wondering aloud’ in our home, particularly where our children may not be able to articulate what they’re feeling, or explore how someone else may feel; ‘I wonder if there is anything going on for X that means she might have looked angry today?’, ‘I wonder if X wasn’t angry but a bit nervous but it looked like anger on her face - what do you think’?

The Bible tells us to pursue unity which implies that it’s something we’re going to need to commit to and keep on working at. Unity is a great idea but a hard thing to put into practice - that’s something that I know from years of experience of church, family, school playgrounds etc! So I need the help of the Holy Spirit, to continue to grow and change my heart, attitudes and preferences to be more in line with His, so that I can lead my children to a place (and beyond) where I’ve already gone. AND I want to pray that God would grow a heart for unity, for anyone, anywhere, in my daughters and sons.