We tried reading the Bible together as a family every day for a month. Here’s what happened

Lindsay Wright charts how having a Bible family time impacted her family. 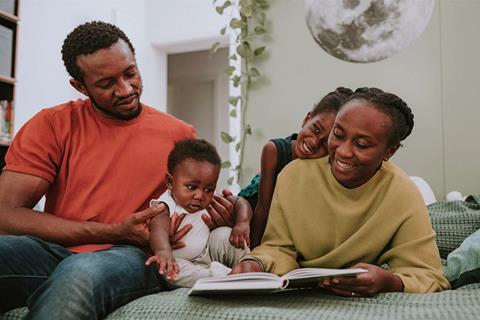 Making time to read the Bible with your children is important, even having some quiet time with God together as a family. I’ve read many articles about it myself, including on this very site, but the question I always find myself asking (and I’m sure I’m not alone in this) is ‘how?’. With life in a constant state of motion and only pausing for sleep how do you fit something in that isn’t already part of a firm well established routine? I’m not competitive but I do love challenges, it snaps me right out of ruts, so I decided to challenge myself, my husband and our two children (aged nine and six) to have some Bible family time every day for a month and see what happens. Here is our journey, hopefully it can help you with yours:

Step One: Find the Bible.

I have no idea where our Bibles are, we mostly use an app on our phone, but that’s not very helpful when we want our children to recognise and learn more about the Bible. So step one is most certainly find the Bibles. I open the cupboard to where I’m assuming they must be and it is utter chaos, so I shut it quickly and reschedule that task for another day. Step One, it would seem, is actually to reorganise the book cupboard.

We want Family Bible Time to be sustainable, so starting off with a full overhaul won’t work, we need to ease it in gradually so it becomes a natural part of family life, so it’s more a remoulding of an existing routine rather than a fully fledged change. For us it feels like meal times are a good place to start, this is when we’re already naturally together and where we talk about our days which should work well with the Bible I’ve picked (an old Gideon’s one I was given at school) which has a section about ‘feelings’ at the front with related Bible verses to them.

The idea was that I would ask them how they’ve been feeling that day, then we’d try to find that feeling within the Bible using the guide at the front and talk about what we thought it meant. The first night did not go well, the children were confused, the language of the Bible was hard to understand and although it wasn’t a massive shift in routine it felt seismic. By day four and it still wasn’t going well doubts flooded my mind as I began to wonder if I’d started this off all wrong. Just then my eldest asks if they could read a verse. They found the passage and verse without needing any help and read it much better than when I read the bible aloud. Day five and my youngest now asks if they can read, and by day six I don’t even bother attempting to read it myself, instead I open it up to them, which goes down an absolute treat. They’re now asking me, and each other, how they’re feeling, how their days have been, they’re finding the Bible passages and taking an active lead on discussing what we read.

It was hard to keep it up every day: there were some days we simply weren’t around at tea time and a couple of times it was because we simply forgot. The feelings element of the Bible time became rather tedious and repetitive, it would seem we float between the emotions of ‘thankful’ and ‘tired’, which resulted in the same verses being read every day. We decided to mix it up by reading the daily verse suggestion section that was also in the front of the Bible, and that really helped to see a bigger picture and hear more about God. The discussion side became more natural towards the end of the challenge period, a far cry from the horror show that was the first few days.

Now the month is over what have we learnt and what’s next? One thing for sure is we won’t stop making time for the Bible in the house now we’ve begun doing it, it’s helped us all connect with God and open up conversation about many things not just faith. It would seem being honest and open with my children about God has almost made us as parents more accessible when it comes to talking about other things in their lives too, and vice versa. What’s next? What I would like is flexibility, some days the feeling section worked, other days the passage for the day worked better, sometimes we just want to pray together, so I’m certainly going to process how that might look going forward. Another big factor to reflect on is that we weren’t actually doing this as a family, with my husband’s shifts all over the place he has rarely been with us at tea time this month, so he’s missed out. I want to find a way we can all have that time together, which may mean introducing something at breakfast, I’m not 100% yet. My head is buzzing with ideas and where I couldn’t see windows of opportunities last month I can now see dozens.

My best bit of advice from this past month when it comes to Bible time with your family is to just do it, if your life is busy there’s never going to be a ‘perfect time’ so pick a day to start and give it a go. Start off small and make it work for you. Don’t worry if you don’t get it right, as with all new things and new relationships it takes time as you get to know each other and figure out how it all works. Have fun with it and feel free to mix it up occasionally.

Lindsay Wrightis a trained Children's and Youth worker formerly with the Blackburn Diocese now working as a freelance writer and artist.