The Windrush Scandal appeared on my radar when David Lammy, MP for Tottenham spoke out about it on Twitter.

It brought into focus certain whisperings around the local community; people’s experiences of secret deportation. Members of the community around me spoke about people from the Caribbean being arrested, placed in deportation centres and then sent away for the past six to eight months. It was seeing David Lammy’s tweet and the mainstream media since that made me realise the scale of it all. It left me feeling pure disappointment.

I am a third generation migrant. My grandparents were from Jamaica. They came during Windrush era, invited to work in what appeared to be a land of gold and promise. They settled in Wolverhampton. My grandfather was a carpenter, so he helped build the Birmingham Rotunda and city centre.

They were greeted with extremely overt racism. Signs emblazoned “No blacks, no Irish, no dogs”. Multiple families had to cram into the same house because so few would house black people. My grandparents struggled. They had very little finances so they weren’t able to take all their children straight away. My uncles lived with their grandparents in Jamaica until they could save enough to bring the rest of the family across.

Both of my parents were born in England, as was I. To hear how people haven’t been able to access the NHS or leave the country because of destroyed documentation breaks my heart. My grandparents and their generation are being treated as illegal immigrants despite serving, paying taxes and literally building the country around them. The contribution of the Church is also worth sharing. Black majority churches bring a wealth to the body of Christ in the UK. This Windrush scandal spits in the face of all of that.

And none of this happens in a vacuum. There is a background of the historical racism they experienced, as well as more recent cases like that of Stephen Lawrence.

I’m an optimist, as a person of faith I always look for the bright side. I see this as a biblical discipline. In my recent article discussing the impact of Marvel’s Black Panther, I shared a narrative of the hunt for empowering black role models. We are still fighting and there is hope. The Equality Diversity and Inclusion agenda and the Equal Opportunities Act of 2010 suggest a government that cares about minority communities. Yet the Windrush affair goes against this narrative.

It would be hard to quantify but it would be interesting to know the psychological perspective of the scandal. For me and many young people it leaves us questioning our whole self-definition. In each application form or questionnaire you are asked to state your race. Who am I then? If I am not acknowledged by the country I was born in, should I still be ticking British? I know many who associate as African, disaffected from British culture. You start to think maybe they have a point.

In Maslow’s Hierarchy of Needs, each part of life needed to achieve self-actualisation is mapped out. A sense of safety is only second from the bottom. This scandal calls into question whether this is even possible for the young people in our community who are part of migrant families. 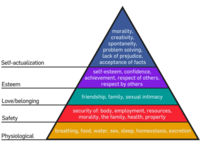 The Church, youth workers and children’s workers need to make space for dialogue. We cannot deny what is happening. Time is the greatest healer and we need to make time for our young people to process this. We shouldn’t try to fix things. We have had to dig deep and push and really encourage people to stay focused and positive. This is call for the leadership of the Church to speak on behalf of the people and show solidarity and support.