Is ‘Spirited’ the modern era's version of ‘A Christmas Carol’ ? 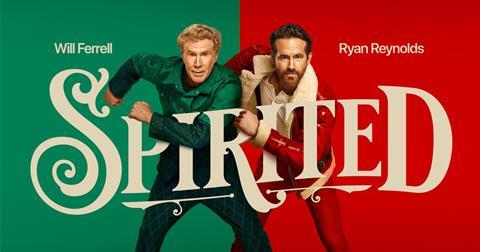 How to watch: An Apple TV+ exclusive movie also available at select cinemas

The spirits who changed the life of Ebenezer Scrooge are back. This time, they’re going to teach Clint Briggs a lesson they might just regret bothering with, as Clint turns the tables and begins to challenge them right back.

Imagine for a moment the trio of ghosts from the Charles Dickens classic ’A Christmas Carol’ repeating their redemption antics on a yearly basis. Not unlike Santa’s workshop at the North Pole, the spirits are equally organised and magic, with the ability to bend time to their will.

Their mission is quite simple. Each year the spirits look for a human who displays the right mixture of badness. This human has to be bad but also must be influential enough to send ripples through the world and improve the human race if they turn good. For example, Scrooge was super bad but also rich, so his generosity and wealth made a significant difference. The twist in the familiar Spirited narrative is that ’The ghost of Christmas present’, played by Will Ferrell, advocates for the team to have a go at changing a human who’s marked as ‘Unredeemable’. This is when we meet Clint Briggs, played by Ryan Reynolds, who’s about to give the Spirits far more than they bargained for.

If you love Christmas, are a sucker for musicals, and found The Greatest Showman an exciting, emotional watch, then you’ll love this. The Greatest Showman team wrote the entire soundtrack. They’ve gone to great lengths to make this feel magical, musical, and at times, truly breathtaking.

Unfortunately, although this is every bit a family movie, it does contain some swearing and pretty unsubtle inuendo. Although it all went over the head of my youngest daughter of 8 years, you should expect some (as one character describes it in the movie) ‘potty mouth’ humour. There is also a song where a certain expletive is replaced by ‘good afternoon’ and repeated for around four minutes. It’s hilarious and pretty tame, but there are moments you might feel they’ve gone too far.

Parents should be prepared for some important grown-up themes. For example, Clint’s apparent selfish behaviour is driven by a need to run away from dealing with his sister’s death. This is an important story point because it leads to him advocating for a social media war that causes a child to take their own life.

In reviewing this movie, I’m loathe to make a child suicide a reason you shouldn’t watch it. The truth is that you should absolutely watch this movie with your teenagers, if for no other reason than that it handles the weight and responsibility of Internet trolling very well.

Finally, I will admit to there being a point in this movie where I was convinced the central redemption arch of the original Dickens classic was going to be stripped away for a more modern, subjective truth narrative. Thankfully I was wrong, and the conclusion was not only perfect but also poignantly heartbreaking. There are twists and turns a-plenty in this Apple Christmas Classic, and I can’t wait to watch it again.

In terms of a rating, let me be completely honest. If you’re going to watch it with younger children, I must caution you that it’s a 12 rating, so be ready for the complicated adult bits. However, as a Christmas movie, I had as much fun as I did the first time I watched Elf or The Greatest Showman, and for teenagers and parents, it has got to be five stars.

John ProckterJohn Prockter is a youth worker who works with four charities in Bridgnorth and Telford.