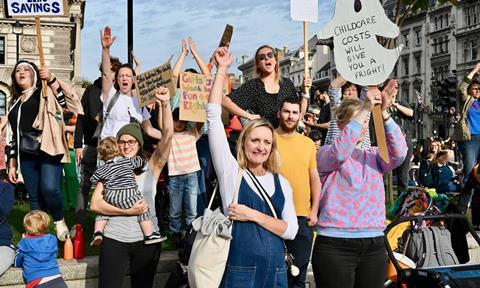 A Christian MP is calling for the cap on support for looking after children to be lifted, to let parents on Universal Credit return to work or work longer hours if they wish to do so.

Claimants can currently claim back up to 85 percent of a £760 monthly care bill for one child.

But Sir Stephen Timms, who is chair of the Work and Pensions Select Committee, told Premier this needs to be increased:

“It’s a big problem. The government is right to encourage people who are out of work to get into jobs, and to encourage people who are working part-time to increase their hours. But the cost of childcare can mean it’s just not worth working or working for longer. So achieving the government’s aim means we’ve got to support the cost of childcare better for people claiming Universal Credit.”

At the moment, parents have to claim back the childcare rebate. Sir Stephen believes paying upfront is part of the reason some parents can’t afford to get back into work:

“For a lot of people finding that maybe £1,000 to do that for that first month is just an impossible task, and they can’t get into work as a result of that. Then the second problem is that the maximum support you get – £760 a month – hasn’t been increased since 2005. In 2005, that was enough to cover almost 40 hours a week of childcare. Now, it’s about 27 hours a week of childcare you get for that amount.

“It’s absurd to have a limit that was set in 2005. We really need to bring that up to date and keep it up to date.

“Supporting parents into work is very important. We also need to make other changes to the system, and we’re going to be doing more work in the Select Committee in the new year looking at how this can be improved so that children can thrive and prepare for a great future.”

The government says its tax-free childcare provides financial support towards the cost of childcare for children aged eleven or under or up to 17, if the child has a disability.

“Tax-free childcare can make a big difference to families, helping with the bills for things like wraparound care for school children, nurseries, childminders and holiday clubs.”