How do we help our teens acknowledge their faith when Christianity is seen as uncool? 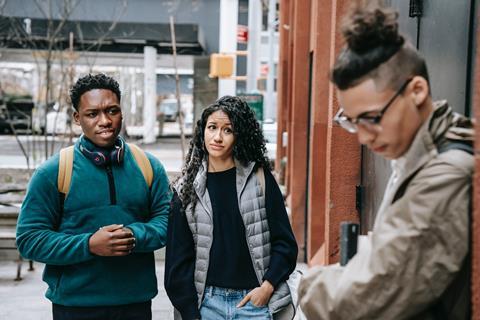 Do you remember how tough it was to be a teenager? Do you remember how much was on your plate? Navigating the hormones that wreaked havoc on a body that was changing faster than a chameleon in a florist’s. The mood swings, the pressure of exams and that incessant nagging fear that you didn’t belong or fit in. Oh! And the sinking feeling when you awoke in the morning and saw the volcano-sized spot that had erupted on your nose overnight.

No. I don’t know about you, but, I’m not sure I would like to be a teenager again, especially nowadays, with the ever-present juggle of social media, meaning you’d never get a break from all those pressures and have yet another place in your life to compare and compete. I think teens today might just have it tougher than we did.

So how, as a parent or a youth worker, is it fair of us to encourage, or even expect, our teens to acknowledge their faith at school or college? Particularly, as we live in a society which believes that being a Christian is the furthest from cool, and even potentially has the moral low ground. Christianity is often perceived as rigid and limiting, judgemental, outdated even. It has a stigma of being unloving and exclusive. So how on earth do we encourage our kids to take on that stigma and openly acknowledge their faith? How do we teach them or train them to be open?

Being a Christian comes with a cost, and I think that the cost feels the heaviest for teenagers. The boundaries and the battle for purity is hard. It is difficult to steward yourself well when everyone around you is making different choices. It is hard to be left out because you can’t be involved with other people’s decisions. It is tough to feel on the outside. The cost feels so obvious and heavy. It would be easy to assume that the cost far out-weighs the benefit.

But what if we encourage our teens to lean into the gains of having a faith, rather than just count the loss? What if we taught them that their identity in Jesus is the most attractive thing to other teens. Because it is. Teenagers and young adults might not like the image of Christianity but they are deeply attracted to the authenticity of living with faith and identity.

I’m a mum of two teen daughters (as well as to two younger boys) and we, my husband and I, have encouraged our kids to focus more on the gains, of a relationship with Jesus, rather than the cost. Both my girls love Jesus and as their faith grows in maturity, they have their own stories of encounters with Him. Overtime, they have gained a beautiful peace before exams because they know they are loved no matter the result. They have gained an identity in a season of life when others have no clue who they are. They have gained power over their choices because they are living for something bigger than themselves. They are equipped to love well because they have experienced powerful love.

As they lean into the gains, rather than the cost, my teens find it much easier to make a difference at school. My two girls are not super public about their faith. They don’t hide it all, they are not afraid to admit they go to church or explain what they believe, but they don’t “heavy pitch” their faith. They don’t hard sell to just anyone. My girls haven’t gone around shouting about their faith but they have been asked why they aren’t stressed out by exams. They haven’t preached the gospel but they have supported friends who are struggling with their mental health. As they lean into their identity, as people who are equipped to love well, my girls have seen some friends give their lives to Jesus, they have prayed for people, invited them to church.

You see, we have encouraged our kids to live a faith that is louder than words. We would rather our kids love people with a radical love, than just work on a strong argument for a faith debate. Acknowledging your faith is much easier when people feel loved and valued by you! Their classmates, even the ones who have been the most critical, have come to them and asked questions, asked why they are different and more confident.

Of course, there have been costs. It’s not easy to be different. My eldest, particularly, has found it hard to be teased because she doesn’t swear or talk about sex all the time. My kids are not perfect; we still have the mood swings and the arguments about bedrooms, the occasional door-slam and eye roll! I am definitely not an expert in parenting either, but I have learnt that first hand stories of encounters and victories are much more powerful than second hand ones. When our kids live their own stories, they are hungry to share them with their friends.

So, I believe, the way to encourage our teens to be open about their faith, is to give them as many opportunities as possible to encounter, face to face, the Author and Protector of their faith. As they learn who and who’s they are, love will spill out.

Obviously, we still have to grieve with our teens often. There are still parties they say no to, things they are left out of, and relationships that reject them, the cost is still present, but when they have seen exactly what Jesus has for them, and heard what He thinks about them…. there is no holding them back!

Jo Rowe is a trained nurse who now teaches food tech in a primary school. She has four kids of her own aged 15 -7. She has taught marriage and parenting courses at our local church and along with her husband is a worship pastor at Salisbury Vineyard.