‘Don’t make classrooms a battle ground for faith like we do in the United States. I believe there’s a better way’ 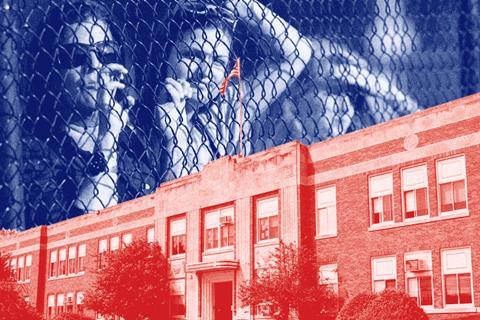 For the first time in history, Christians are not a majority in England. These sort of findings on demographic decline of Western Christianity tend to generate all sorts of anxiety. Sadly, this anxious discourse—of facts, fixes, and the “fate of the West”— often displaces much of its anxiety about the future of the church on the future of the church: children.

Children don’t exist in the church as church “in waiting”. Rather, their energy, their boundless optimism, their curiosity and innocence, have something to say and contribute now to the body of Christ. We are actually commanded to become like them. Isn’t that what Jesus said?

Anxiety is not the Christian response to our post-Christian moment. For one, it betrays a profoundly self-centered point of view. The demographic decline of Christianity in the West is matched by a demographic explosion of Christianity in the Global South. Which is why our anxiety—unresolved and detached from the reality of Christ in the world— might have UK Christians grasping for the wrong solutions as parents sending our kids to school in a post-Christian society.

Many Christian parents, anxious about the reality of a post-Christian moment in the UK, might look to America for a playbook on Christian education and parental involvement. After all, the US is host to some of the world’s largest Christian education enterprises. It has massive homeschooling networks, and a culture war mindset that seems to take charge. We might think it reasonable to channel some of our anxiety by asking: how can we become like them?

That would be a mistake.The US playbook of culture war involvement (often touted as “Christian” or “biblical”) in our kids’ schools has a losing record. I saw this first hand as a pastor to college students in the States. Historian Mark Noll, speaking primarily of the US context, famously said, “the scandal of the evangelical mind is that there’s not much of an evangelical mind.” If we take the developing minds, bodies, and spirits of our children seriously, we will look to the US not as a witness, but as a warning.

Parents facing a post-Christian moment in the UK might find something aspirational in the American culture war model of taking charge of whole school boards, of censorship in libraries, and brazen ideologue leaders. But don’t forget, the same culture engaged in these cultural fights has proven unable to overcome its own tyranny, one which leaves these schools without sensible and adequate gun legislation. Tragically, American schools have been not just a culture battleground, but a literal one.

Historically, education has become a flashpoint for every sort of American cultural anxiety. Public schools have featured in several Supreme Court rulings on religious establishment and freedom. There have been historic conflicts over curriculum, such as fundamentalist attempts to define or discredit science by theology.

Many private Christian education networks in the US were started as a way to maintain segregation of white and black communities. In these spaces “Christian” was and has continued to exist as code for “excellence” in terms of social standing and economic affluence. This isn’t “Christian” in terms of Christ, but in terms of culture.

You could easily to trace the history of the United States solely by the conflicts we have waged over education. And these histories are with us today. These histories ought to be an occasion for repair, restitution and reconciliation. But they are being retrenched in fresh “wars over wokeness”. No, the US culture war in our schools is not something I’m itching to see replicated here in the UK.

This isn’t to ignore the fact that there are indeed real issues being decided and worked through in our society today. Human sexuality, economic alleviation, climate change — it is precisely because the Christian life intersects with these matters that we should be unwilling to cede ourselves as Christian parents to reactionary and reductive culture war definitions that cast “us” as righteous and “them” as unrighteous. The development of our children, mind, body, and spirit are not made whole by the fragmenting reality of parental anxiety. Whatever the legislation arising in a UK post-Christian culture, the US playbook is ill-suited to address it.

Not only is “culture war” reductive when it comes to the “issues”, culture war is also destructive to discipleship. When Christian education becomes an exercise in wall-building, in keeping out “the bad”, you unwittingly communicate a theological truth: a Jesus who doesn’t welcome our questions also can’t hear the prayers of sinners. And so it’s maybe not a surprise that those who grow up with this vision of Jesus come to discard it.

In light of that, as a parent I want to encourage fellow parents: don’t wage war, pay attention. The Christian way to pay attention is not by “taking control” of existing parent led orgs (classic US culture war) but rather to put yourself at the service of the community our schools reflect as church. Note, this doesn’t mean silence, it doesn’t mean absence, it means choosing persuasion over coercion. It means embodying salvation in front of our kids, while narrating for them how to live with a world who doesn’t know its source.

Somewhere in all this, we’ve lost sight of the fact that the world is not our enemy. If Christ is Lord, and he is, then the opposition and animosity between church and world is something we are called to bear witness against. I don’t mean to deny the *difference* of sancification, of our call to be holy as God is holy. I mean rather that we exist for the world to the glory of God.

Ours is not a despairing flight from the world (perhaps this is the temptation of the UK Christian) Nor is it a crusading assault on the world (this is the temptation of the US Christian). In whatever situation we find ourselves, ours is a witness to the life of Christ as the body of Christ. Ours has been made a life that demands to be lived in, to, for the world. We can seek to meet the needs of the enemy, precisely because the enemy has a valid claim on us. This is all because Jesus offered his body for us.

We can break bread with enemies while refusing to take part in evil. And we should be cautious to assume and wield our own knowledge of what is good & evil to our own predecided ends. Culture war encourages our anxiety towards this insantity. But in Christ, we walk a different path, one full of responsibility but also of peace. And that is not just what the world can see form us, but our kids, too.

Jared Stacyis an American pastor and current PhD candidate in Theological Ethics at the University of Aberdeen.