Being inducted and training volunteers 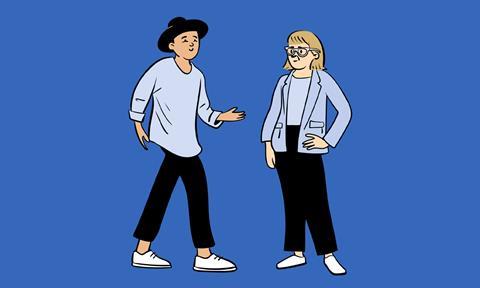 Being inducted and training volunteers

Starting somewhere new is daunting, especially if you are surrounded by people who have been at a church for years (with their name on a pew!). If you begin as a fresh-faced youth minister somewhere, everyone knows who you are, while you know nobody. Everyone thinks they know what you are going to be doing in your job (or at least they have their own list of what they think should be your priorities); an induction is to help you settle in, give you a sense of place – the geography of the church, community and the stuff going on locally. But it will also give you a sense of history – what is the journey the church has been on? How have they arrived where they are with you in this new post?

So, let’s dive in - what should be part of an induction?

There might be a lot going in the church, but to get a grip on the town / village / part of the city / community, you need to walk the patch. So, part of an induction should be a walking tour of the area to introduce you to everywhere from shops, schools and community spaces to where young people hang out or new-build houses that the church is just beginning to make connections with. Every community is different, but this helps set the context for ministry. We don’t (or shouldn’t) simply minister within the walls of a church building. As one church I used to work with had as their strapline: “In the community, for the community”.

In every church I’ve been part of there have been catalysts – people who make things happen, ensure stuff works, give loads of time and effort to ministry activity. But let me whisper this quietly: they are rarely the church leaders or clergy. Getting to know these people is essential to understanding how the church runs. For example, there is that one person who just makes stuff when it is needed (a set for a holiday club, a gunge machine) or fixes things when they break (table tennis leg, dodgy TV). There are also the volunteers who are the backbone of the effective teams at church. Get to know them! So, a group of these special people should be introduced to you as part of your induction.

I’m lumping a lot of things together here, but what is the process for putting in your expenses? Are there forms you are supposed to use for booking time off? Is there a printer and does it have a youth code, so you don’t accidentally run off 1,000 flyers using the worship team’s allocation of printing for the entire year for one event?

There should be a staff handbook, and this would be the time to introduce you to all the delights that this contains. It might seem boring, but when you need the treasurer to sign off on something you will be pretty glad you had a read. This would also be the time to bring clarity around time off in lieu and how that works, or when essential meetings are so you get those in your diary from day one.

Space to work and space for kit

It’s perhaps the crunch question you might have, but where are you going to work? Is there a dedicated youth office or are you in a shared workspace? Do you plug in your own laptop or is one provided? Is everyone using Macs or are you Microsoft Office?

You should be issued with a set of keys and alarm codes. Oh, and the big challenge with space is the fact that both children’s and youth ministry require space for stuff, whether that is art materials, resource books, study materials for children and young people, youth Bibles, inflatables, indoor hockey sticks or any of the other paraphernalia needed. Often in a church, space used like this is at a premium, often needing to share cupboards and storage space, so an induction should include a conversation about how that is going to work!

I’ve added this to the induction because I think it is important that if you start somewhere as a children’s or youth minister, you don’t arrive and start teaching in junior church week one or lead the youth group from the first session after you have said: “Hi!”

Visit the teams, groups and activities you have responsibility for and watch them in action, This is a vital part of starting well, which is why I’ve included it. When you are in the midst of leading, organising and making things happen, it is very hard to have an objective perspective on what is working well, where there is momentum and a great team dynamic and where things maybe need a bit of work or a team is obviously looking tired and needs some input and encouragement.

I’ve left this to last, because it is sometimes the only thing covered in an induction and the other stuff I’ve mentioned is really important. You should know by now (it should have been mentioned at interview) who your line manager is and the expectations around meeting up, agendas etc. As part of the induction there should be an initial line management meeting and a conversation about supervision. I recommend this as an additional level of support.

Supervision means different things to different people but I’m using it here as a catch-all term for coaching, mentoring, professional supervision – essentially, an external objective voice you can meet up with every couple of months. At your induction it might be that you are introduced to someone who will do this, or you are encouraged to seek out your own.

OK, that’s induction - how does that link with the training of volunteers? Well, by some crafty sleight of hand I’m using the same titles as above but linking those to working with new volunteers.

Walking the patch with volunteers

The patch for volunteers is helping them see the way the team they are volunteering with fits within the larger vision of the church. They aren’t just volunteers but key people in ministry who are giving their time to serve. Showing them how the team they are joining connects and relates to others in the church and community is a way of casting vision. The worst kind of team in a church is one that is siloed and precious about its own activity and either isn’t interested or competing with other teams for members!

Meet the catalysts with volunteers

A key part of drawing new volunteers in is creating space for them to build relationships with existing team members. Often people will know each other, but there is nothing like working together for a common goal to draw people into closer relationships. Within your existing team there will be the core – you, as team leader, aren’t a one-person show. It’s important new volunteers see that: they aren’t just cannon fodder for you to throw at stuff that needs doing.

Admin and policies with volunteers

Expectations might be a bit different for volunteers; the responsibility rests with you as team leader. However, there are still guidelines that need to be followed in working with children, young people and other team members. Everyone should be familiar with the safeguarding policy and how to report any concerns they might have.

There might also be unspoken expectations, for example that everyone on the team turns up 15 minutes before the children and young people arrive to pray together. If this is so familiar that it is a bit like breathing for the existing team – you just do it – make sure you write down what you and the team actually do so there are no surprises for new team members.

Space to work and kit for volunteers

Usually, your volunteers will just turn up and all the kit will be there waiting to be got out of cupboards, set up ready for the group, and then waiting to be put away again at the end. Volunteers might be time poor – they can show up, work with the kids, but can’t necessarily be around for 30 minutes at the end to make it look as if there weren’t 30 children throwing glitter and glow sticks around a room. But, it really builds team if you have a few who can help set up and a few who can help set down. It is also a chance to chat through how things are going, and for new team, what do they make of it all and are they going to come back next week?!

Visit and watch for volunteers

On that ‘will they come back’ thought, give volunteers a chance to visit and watch what happens. They might be nervous, they might never have worked with children or young people before, they might just want a chance to take it all in before they commit. Give them space to do that, let them observe and buddy up with a more experienced team member.

Make sure you are clear that coming once doesn’t mean they have signed them up for life. They want to serve where they think they can make a difference and bring some passion, if it doesn’t feel like it is for them, that is fine. You don’t want to recruit half-hearted ‘I’d rather be somewhere else’ people anyway.

Line management and supervision for volunteers

Again, this looks a bit different but there should be some expectations around team meetings (for example, first week of a new term the team meets to plan and prepare). It might be that you occasionally take individual teams out for a coffee and have a catch-up to see how they are doing.

This might also be a chance to explore how they want to develop and grow in the team (so you become an informal mentor when it comes to their involvement in the kids’ club or youth group). It is worth having a simple job description for volunteers too, with details of time commitment, who they are responsible to, what their role involves (for example, a small-group leader for five children), when the group meets and, importantly, a review period.

That’s it. I’ll just finish by saying that if you focus on these things, which aren’t the actual stuff of doing ministry with children and young people and can seem a bit boring or less important, you are more likely to have a passionate, engaged and effective team. The same goes for inducting a new member of staff, which was where we started. Investing in people this way is investing in children and young people. If we enable staff and volunteers to thrive, then so will the groups they lead and have responsibility for (oh, and it makes it more likely that others will want to join in!).

Ali CampbellAli Campbell is a youth and children’s ministry consultant.