Safeguarding has a new name

Thirtyone:eight, formerly the Churches Child Protection Advisory Service (CCPAS), relaunched itself at an event hosted at the V&A Museum of Childhood, which was opened by Sarah Champion MP.  The relaunch included a new name and visual identity, plus a renewed vision to protect vulnerable people in our society. But why the change, and what’s the new name all about?

Thirtyone:eight has been trusted by thousands of organisations for over 40 years to give advice and guidance on all things safeguarding.  However, over the years we’ve found that our previous name no longer adequately reflected who we are, and the breadth of service we provide.

As the only independent Christian charity offering a complete safeguarding solution we now work alongside organisations, faith, community and government groups, making sure that they are equipped and empowered to protect vulnerable people. We do this by providing training, consultancy, disclosures and a 24 hour helpline, as well as leading the way in informing legislation and promoting high standards in safeguarding practice.

We often find that safeguarding can be seen as a burden, an enforced requirement that must to be met, a legal box that must be ticked, but it is so much more than that.  At its heart it is about having a real and active concern for people, especially the most vulnerable in society, and ensuring that we are all creating environments that are safe, nurturing and that enable people to flourish. 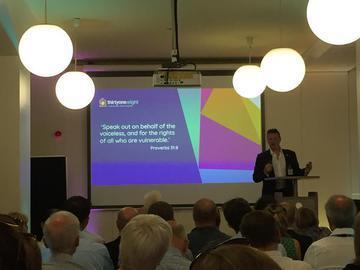 Our new name reflects what motivates us.  It’s inspired by Gods call to “speak out on behalf of the voiceless, and for the rights of all who are vulnerable” as described in Proverbs 31:8.  We care about vulnerable people because we believe that’s what God told us to do.  We believe its central to God’s heart for his people.

Alongside this, we need to acknowledge that vulnerability isn’t always a permanent state.  It is something that all of us can experience at different times in our lives.  The call to protect the vulnerable impacts every single one of us.

We’re really excited about what the future holds and want even more people to join us in capturing that vision of a world where every child and adult can feel, and be, safe. And then to do something about it by creating safer places. Together.